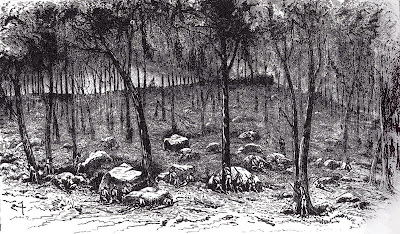 It was their first trip to Pennsylvania.

Company K, 50th Virginia Infantry, was, like most Civil War units, made up of brothers, cousins, boys who had fished and farmed together. These men were mine; my great-grandfather, his future brothers-in-law, uncles, cousins, maybe a nephew or two. They had a party in Patrick County before setting off to Wytheville to enlist, the Pucketts and the Bowmans in the shadow of Groundhog Mountain, passing a jug of white to bolster their courage and soften the sadness. Their neighbor, James Stuart, was already at war--an officer. Perhaps they toasted him.
My great-grandfather was captured at Culp's Hill ( sketch of Confederate pickets, above, and the battlefield, below) on the second day of the fighting at Gettysburg. He was taken to Fort Delaware, and then to Point Lookout where records say he died. He didn't. He came home, eventually, back to the hollow under Groundhog Mountain, married, had a family, farmed the rocky hillside, buried his wife, vainly lied about his age and married again. My grandfather was born to him and his young wife in 1894. 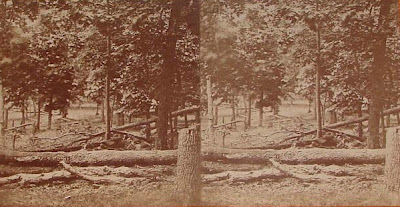 Grandpa told me stories that his daddy and uncles had told him; once, Great-Grandpa was entrusted with feeding and caring for General Lee's horse. Not until I was an adult did I find that men were eating rats and rotten seagulls that washed up on the beach at Point Lookout. Those stories were not passed on.
At least one of my relatives lies in Hollywood Cemetery, or at least, that's the story. 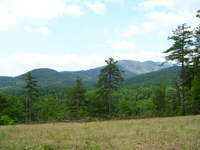 His grave is among the hundreds of unknown soldiers and the family was told that was where his remains were placed. Would he care that he rests with presidents, generals, Stuart himself, or would he have rather died an old man in the Doe Run community he came from?
As Gen. J. E. B. Stuart wrote, expressing the sentiments of every soldier about his home, “If I could get to old Patrick I would be a happy man.” * 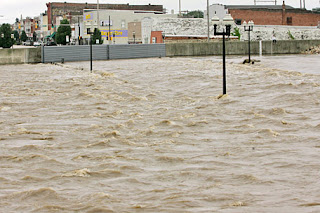 If you've been following national news at all over the weekend, you've heard about the flooding in Ottawa, Iola, Osawatomie. It's unbelievalbe. Flood gates are all that keep the raging Marais des Cygnes River from flooding the businesses of downtown Ottawa (right). Evacuations have been the order of the day as families all over southeastern Kansas scramble for precious belongings and head for higher ground. Travel is perilous in many places and storm chaser, Joey Ketchum, snapped this image below -- a roadway leading into the water, becoming an all too common sight. 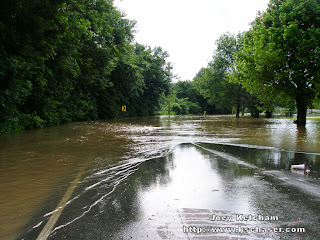 The town of Osawatomie takes its name from the confluence of Pottawatomie Creek and the Osage River. (At that point, it is actually the Marias des Cygnes; it becomes the Osage downstream a ways. ) In the 1850s, Osawatomie was the home of a man soon to make news around the world--the abolitionist John Brown. His sister lived in the town, and Brown and his sons mostly lived a camplife along the nearby creeks. He earned the sobriquet, "Old Osawatomie." It was here that one of the biggest battles of Bleeding Kansas was fought in August, 1856. Looking at those images one would find it hard to believe that John Brown and his men waded the river to escape from the Missourians. Lucky for them, it wasn't flooding that year.
________________________________
The Free State of Patrick

For more information on Gen. Jeb Stuart or the boys from Patrick County, click on the link to the right and check out Tom Perry's finely researched and written publications.
Posted by Deb Goodrich at 9:23 AM