Tis the season. . .
In 1975, I was at Mary Washington College, Fredericksburg, Virginia, attending Governor's School for the Gifted and Talented. (Don't laugh.)A junior in high school, I was at first terribly homesick. Mama would send me The Enterprise, our hometown newspaper, and I eagerly awaited its arrival. My suitemates, mostly from Washington, D.C. and environs, found the homefolks of Patrick County quaint, but what they thought downright hysterical were the photos of the largest rattlesnake found each week.
Yep, the farmers and orchardists of southwestern Virginia would proudly toss the dead reptile into the back of the pickup truck, drive into Stuart, and get their picture made for the next issue. These images, and those of the largest tomatoes, or potatoes shaped like Nixon, defined the summer season.
Now comes even bigger news! A few weeks ago, Allen Hopkins (above, right, with his brother-in-law, left) was operating a motor grader in Patrick Springs when he spied something strange in the grass. No, it wasn't a snake, worse! It was the snake's skin. Since it was pretty long and didn't look like a blacksnake, Allen took the unusual evidence to veterinarian, Lock Boyce. Gleefully, Boyce noted that this particular epidermis belonged to a a boa constrictor, and the snake is probably still loose in Patrick County. According to the Enterprise, Dr. Boyce said he and his brother Fred, who is also a snake expert, are looking for the missing snake and hope to find it, catch it and display it so people can learn more about the huge reptile. Boyce said the boa constrictor is "incredibly strong" with coils like steel. Oh, and apparently, boa constrictors can climb. The snake is very hard to kill with a gun and should not be approached, Boyce said. 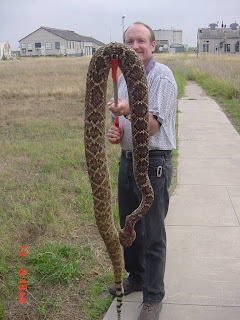 Okay, so this story comes on the heels of another item from our friend Jay Jackson in Missouri. He forwarded this image, supposedly Abb Williams and a 9-foot, 97-pound rattlesnake found on his farm near the Springfield Airport. My question is, how did this snake die? I grew up on a farm and if any hillbilly I know had caught sight of this monster creeping toward the henhouse, it would have been blown so full of holes that it would have looked like a Chinese Buffet. It appears that the head is in tact, so it didn't die that way. Perhaps it was old age. From its size, this monster has had several seasons of plenty.

Then, upon closer examination, the snake doesn't appear quite dead. Wouldn't its head be hanging limply? Okay, Abb. If you haven't been eaten by now, please drop me a line and give me the details. In the meantime, I'm sending this one to Dr. Boyce.
Posted by Deb Goodrich at 5:11 PM

It looks alive to me.