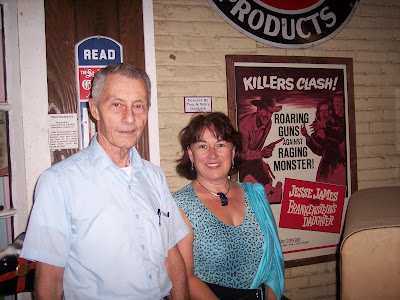 This weekend's tour was such fun, primarily because we only allow fun people to come along, and we only visit fun places. We have so many people comment that if history had been this enjoyable in school, they wouldn't have hated it so much . . . .

First off, Saint Joseph, Missouri, is one of the most historic towns west of the Mississippi River and better, it is chock full of history advocates. Two of the most ardent and effective--Joe Houts and Gary Chilcote. Joe is active in many community concerns, especially the Pony Express Museum, and Gary is the director and, along with his wife, Mary, the chief benefactor of the Patee House Museum. Among the artifacts on display at the Patee House is an original movie poster, Jesse James Meets Frankenstein's Daughter, that Tom and I donated. Above, Gary and I with this interesting artifact. 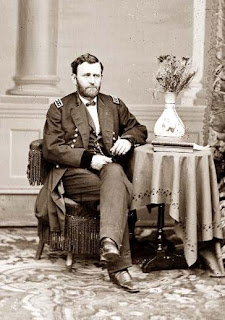 We plan a bus tour for St. Joseph on September 22, so sign up soon. Seats will be going fast. September is also the scheduled release date for The Assassination of Jesse James by the Coward Robert Ford, the long-awaited film starring Brad Pitt. Based on events that occurred in St. Jo, the film already has folks flocking to the home where Jesse died.

Speaking of dying, President U. S. Grant, left, died of cancer on this day in 1885. He was only 63 years old, and struggled to finish his memoirs to leave a financially secure future for his family. He is an intriguing, though controversial, figure among military and political historians. At heart, I believe, he was a good man.
Posted by Deb Goodrich at 2:33 PM

PBS just did an "American Experience" segment on Lee and will do Grant next time. I visited his home (that was given to him) in Illinois and the thing I remember best is that he was said to have loved cucumbers.