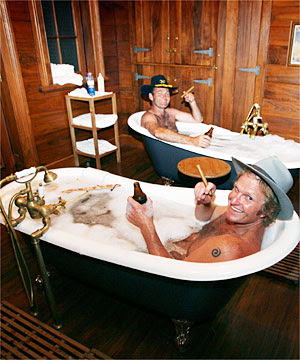 I'm not sure if the cowboys are part of the deal, but if you're interested, this Wild West town in New Zealand is for sale for something in the neighborhood of $3 million. According to the Dominion Post, there is a luxury lodge as well as a reconstructed town, all situated on a 406-hectare parcel of land (How big is a hectare anyway?)

"The owners wanted to give people the same effect a cowboy would have had at the end of a trail - finding a mid-western town in the middle of nowhere," said the auctioneer. Looks like a deal to me.

In West Virginia, a different kind of historic property is on the auction block. 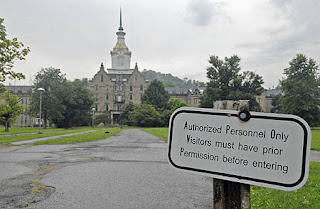 Originally called the "Trans-Allegheny Asylum for the Insane" when chartered by the state of Virginia in 1858, the Weston State Hospital is as much a part of downtown Weston as the 120-year-old Italianate courthouse. It is so picturesque it has been used in promotional literature for the town. According to the Pittsburgh (Pennsylvania) Post Gazette, the jewel of the 300-acre plus hospital property is the main building, a massive, nearly quarter-mile-long structure built of sandstone. The stone was quarried mostly from the West Fork of the Monongahela River (I love the name of that river--wrote this blog just to get it in--makes me think of the song, "River Man," by John Hartford and Bill Monroe). The Monongahela borders the hospital property. An historical marker outside the hospital's wrought-iron fence says the nearly half-a-million-square-foot building is the largest hand-cut-stone building in the country. Wow.

Local folks and state officials would like who ever buys the property to retain the main building, which was built between 1858 and 1882, and was designated a National Historic Landmark by the National Park Service in 1990. A few years ago, there was talk of turning the asylum into a casino. Asylums to Casinos. Kind of like "Rails to Trails."