All in the Name

My blog of a couple of days ago discussed the adventures of Frank James, present tense. Well, not to be outdone, Cole Younger is making headlines today. From the Paradise (California) Post:
Cole Younger, 25, was reportedly driving his motorcycle east on Pearson Road at a high rate of speed when he attempted to pass Beth Hana, 50, while she was attempting to make a left hand turn onto Newland Road, according to the Paradise Police Department.

Younger collided with the vehicle, which made him leave the roadway and then crash into a fire hydrant and a fence.

Younger received major injuries and was flown by helicopter to Enloe Medical Center in Chico. According to police, it is still unknown if alcohol played a factor in the accident. . . . 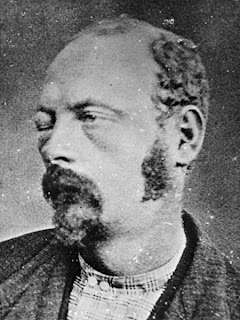 Cole Younger (right) wasn't feeling great either when he posed for this image. As a matter of fact, I believe this photo was made not long after Cole, Jim, and Bob, and perhaps the James Brothers (Frank always denied it), attempted to rob the bank in Northfield, Minnesota, in 1876. The Youngers were shot all to pieces; Frank and Jesse escaped.
_________________________
In Ohio, the namesake of one of my biggest heroes is also hospitalized. According to the Associated Press, Jeb Stuart Magruder of Watergate fame, has been cited in two traffic crashes and with leaving the scene of an accident. Magruder was an aide to President Nixon who spent seven months in prison for his role in covering up the 1972 break-in at Washington’s Watergate complex. Allegedly, he rear-ended a motorcycle and struck the rear of a box truck Monday on Ohio 315, according to police reports. Magruder sped away after the first crash with the motorcycle, witnesses told police.

The AP reports that police cited Magruder, 72, of Columbus, with two counts of failure to maintain an assured clear distance and one count of failure to stop after an accident or collision. The charges are misdemeanors. One witness said the car was traveling above 90 mph leaving the scene of the accident with the motorcycle.

Another witness reported seeing Magruder’s Audi speeding and making erratic lane changes before the first accident. (Honestly, have you ever driven through Columbus? I can't imagine how "erratic" you have to be to get noticed!)

Magruder was in serious condition at Riverside Methodist Hospital after the crashes Monday. The drivers of the other two vehicles weren’t seriously hurt.

Magruder, (left, in 1970) a retired Presbyterian minister, was charged with drunken driving by in 2005 in Fayette County, about 40 miles southwest of Columbus. That charge was later reduced to reckless operation, according to court records in Washington Court House. In 2003, he pleaded guilty to disorderly conduct after police in the Columbus suburb of Grandview found him passed out on a sidewalk.
Well, Jeb, we hope you are not badly injured, and truly our prayers are with you. But you might do well to take a page from the lesson book of your namesake. J. E. B. Stuart was a teetotaler, one of the few people who was so much fun he didn't need booze!
Posted by Deb Goodrich at 10:38 AM

I've been to Northfield where I saw this picture as well as the skeleton of one of the outlaws. The citizen who killed him was a medical student, and his school was short on cadavers, so he used the dead outlaw for his. He later kept the man's skeleton in his office in Northfield right up until he retired. It now resides in the bank that was robbed alongside the index (trigger) finger of another outlaw.