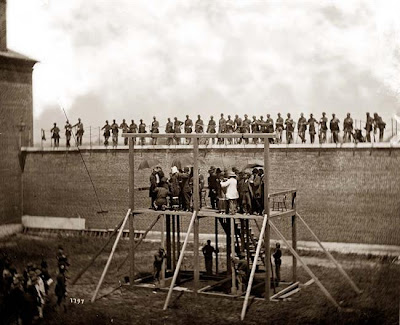 July 7, 1865, Washington, D. C. -- By 11 a.m., a huge throng had gathered at the upper gate of the Arsenal grounds. To the disappointment of all, a strong guard around the entire perimeter prevented most from entering. Outside the gates, enterprising vendors set up stalls and sold iced lemonade and cakes. As the crowd stood staring at those who came and went, a stir was created when Mary Walker passed by. Not only was Walker the sole female physician in the Union Army, but she was the only woman admitted to the execution. Loathed by some, laughed at by others, Dr. Walker shocked all, male and female alike, due to her penchant for wearing men's trousers. On this day, the young woman added to her scandals by riding a horse through the crowd astraddle like a man.

In the maddening heat and excitement, tempers soon became explosive. As a soldier attempted to pass through the Arsenal gate to fill his canteen, he was halted by the sentry. Sharp words were exchanged between the two when a sergeant of the guards suddenly appeared. Cutting the argument short, the angry officer simply drew his sword and stabbed the thirsty soldier in the eye. With blood streaming down his face, the wounded man was quickly carried away. Learning of the incident, the victim's brother, also a soldier, raced to the scene. As the stunned crowd watched in horror, the outraged brother raised his musket and shot the sergeant dead in his tracks.

Inside, David Herold, Lewis Powell, George Atzerodt and Mary Surratt waited in the stifling heat to be led to the gallows. It seemed the whole world was insane.

From the shadows, I suppose it must been noon. The doctor wasn't the only woman at the hanging because one of the hangees was female too, as I recall.