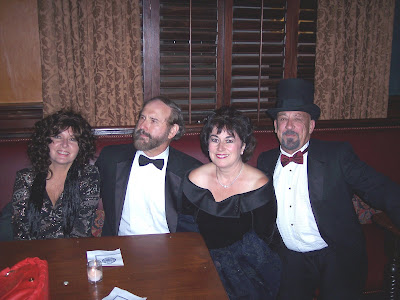 Friday night found us at the Union League in Philadelphia (above: Carol Waskie, Andy Waskie, me, and a distinguished gentleman I found in the bar). After drinks, we adjourned across the street to the Crystal Tea Room for the Gravediggers Ball to benefit Laurel Hill Cemetery. This is the third such event and it was a smashing success. Andy is on the board of directors and often gives tours of this historic burial ground, one of the few cemeteries to be named a national historic landmark.

The Friends of Laurel Hill raises money for the continued restoration of the grounds and gatehouse. Visit their website: http://www.thelaurelhillcemetery.org/ and be sure to check out the store where you can buy books, tee shirts, and postcards like this one that reads: Tombs are filled with subtle symbolism. This one, for instance, says "I Was Filthy, Stinkin' Rich."

Laurel Hill is the second garden cemetery in the country--Mount Auburn in Boston being the first. It is incredible and anyone visiting the City of Brotherly Love should take the time to stroll the picturesque hillside over the Schuykill River. General George Meade and thirty-nine other Civil War-era generals reside here, in addition to six Titanic passengers. One literally trips over the history.

On Friday night, we tripped the light fantastic for preservation's sake.
Posted by Deb Goodrich at 8:51 PM