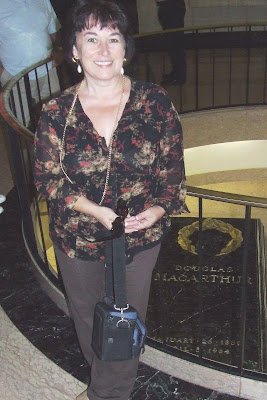 Douglas MacArthur was, at heart, a Virginian. It explains a lot. Only Texans have comparable egos.
Virginia is the center of America's creation myth--John Smith, Pocahontas, Patrick Henry, Thomas Jefferson, George Washington, Lewis and Clark, Robert E. Lee. As a result, we rightfully grow up believing Virginia is the center of the universe. Since I lived near the North Carolina line, my world encompassed its history as well, leading a friend of mine from Topeka to remark with exasperation, "I guess you think God came from Virginia and Jesus came from North Carolina!"

Tom and I were privileged to be included in the Gen. George Meade Society's trip to Virginia last weekend. The last stop was the grave of Gen. Douglas MacArthur in Norfolk. The legendary soldier, though a military brat himself, considered Norfolk home because it was his mother's home, and after all, Macarthur was a Mama's Boy. She was determined that her son, who would be a great general one day, be born in her home state, but alas, fate determined otherwise. He was born in Arkansas.

Arkansas!!! I'm sure the poor woman never recovered from the blow.

(Thanks to Jim Dover for this photo of me at the sacred shrine of MacArthur!)

Hey Deb,
Don't forget JEB and Stonewall, they are the best things that came from Virginian except for you! ou missed a great Mine Creek Battlefield Moonlight tour this past weekend (Kendall Gott, who looks so fine he should be from VA) played my hubby Mel Dolson and a fine time was had by all. The next day I was in Lecompton out looking for Douglas (or where it used to be) and ended up swiming in the Kaw, not something I advise in October with water starting to turn chilly! Thought about you and Tom while I ran around Lecompton and the countryside! Hope Philly treated you well! See you at Roundtable on the 23rd!
Michelle

You're right; Ken is handsome enough to be a Virginian. . . . must be a Cavalier in the woodpile somewhere. . . .