This is the best looking man I've seen in a long time. Too bad he's dead. (Ain't that always the case?) 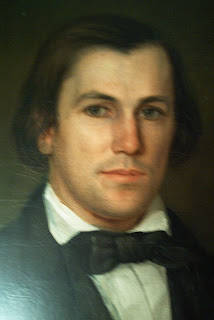 William Alexander Stuart was the older brother of our hometown hero, Gen. J. E. B. Stuart. He moved to Saltville, Virginia, before the war and became rich from the saltworks and land investments. After the war, he took care Jeb's family and just about everyone else it seems.

I have always thought Jeb handsome. We had a photo of him hanging in our office and my friend, Karen, also a Patrick Countian but hailing from Woolwine rather than Ararat, thought the picture was John Travolta in some movie role. Yes! He was that impressive! But he pales in comparison to his older sibling.
When our friend and Jeb chronicler, Tom Perry, was here last week, this image was in the slide show he presented. He forwarded me a copy so I can drool in private. 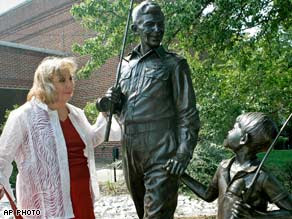 Thelma Lou came to Mount Airy, North Carolina, last weekend to join in the town's celebration. In the AP photo at right, the 81-year-old Betty Lynn poses with the statue of Andy and Opie at the Surry Arts Council. There is a wonderful interview, discussing her feelings about the show and Mount Airy, at this link:
http://www.cnn.com/2007/SHOWBIZ/TV/10/02/backtomayberry.ap/ ____________________________
Free State of Patrick 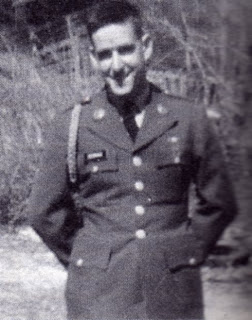 Tom Perry works very hard to share the history of our fair homeplace. Recently, he added a page on the soldiers from Patrick County killed in Viet Nam. One of those was my cousin, Roger Dale Bowman (left).

Roger Dale was only 21 years old when he was killed in August, 1968. I was 10. He was an only child and he and his parents lived with his widowed grandmother, Aunt Venie. I loved Aunt Venie. Granny and I would walk through the woods to her house and I would read the newspaper to her, or comb her hair which hung to the floor. When word came that Roger Dale had died, the relatives started pouring in--so many relatives. But Roger Dale was Aunt Venie's favorite grandchild. They adored one another. I believe it was a week or so from the time the family received the news til Roger Dale was buried.
The churchyard where Roger Dale, my grandparents, my mother, our great-grandparents, cousins, uncles--all rest together--was set aside by my great-grandmother. The first grave was her son, "a homesick soldier boy," who died on Christmas Day at Camp Lee, Virginia. On the day of Roger Dale's funeral, my brother and sister and I stood with Mama in the shade of a little pine tree as taps were played. My sister picked up the shells from the 21-gun salute. It was very hot.
Thank you, Tom, for keeping the memory of these men alive.
Posted by Deb Goodrich at 8:38 AM

Hey Deb,
This one really got to me...I think about those men from Vietnam that were not treated well when they returned, those that have fallen through the cracks in society and those that never made it home...how noble their sacrifices were regardless of one's opinion on the war. It strikes a chord for today's war I think, how to do you remember those that have fallen in a way that gives life back to them, comforts their grieving loved ones and helps us all make sense of the crazy world we live in these days.