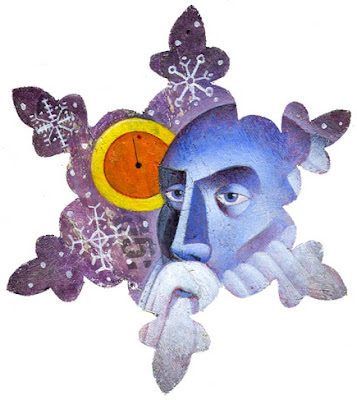 We slept with the windows open. The high had reached the 80s, but the wind was ferocious all day; last night, it clattered the shutters as winter pushed the warm air across our faces to the east. Today the high is right now, about 70 at 10:00 a.m. It drops until tomorrow night when our low will be in the 30s. Western Kansas, which bears the brunt of climatological change, has a chance of snow this evening. Yesterday, their temperatures were around 90.
Unlike spring, which brings thunderstorms and tornadoes, the energy of the autumn equinox is more introverted, driving folks to hearth and home, causing them to reach for sweaters and blankets. There is something primal in this experience as we are driven toward the fire, to contemplate, to commune while the winds howl, railing against the windows.

Now is the time of life and death decisions: which plants will be brought in, which will be left to the ravages of cold and ice. The tropical hibiscus with new buds have bright, green, trailing sweet potato vine climbing from the pots and I can't bear to think of their dying; the asparagus fern and the Great Wandering Jew are so full and glorious now that to see them turn brown and wither is too painful to contemplate. I suppose one or more bedrooms may become nurseries this season.

I must close the windows; a cold rain is beginning to fall.

The illustration above is Old Man Winter / Spring Chick by Scott Bakal. From the artist:
I am currently working on a series of personal art that relate to the four seasons, which will be published into a book in late 2006 and exhibited throughout 2006-2007. I wanted to link up the Robert’s Snow snowflake conceptually to the series because the subject matter is so similar. The concept of this snowflake is when there is an ending; there is always a new beginning. In ‘Old Man Winter’, you see the time is just before 12 signifying age and the end of a long cold season or deeper, a pressing issue. On the backside, ‘Spring Chick’, you see the clock just after 12 meaning life and rebirth or the solving of a pressing issue.) http://robert23.fatcow.com/view_copy.php?snowflake=570
Posted by Deb Goodrich at 11:04 AM