A Brief History of the "Woah"

Fellow blogger and fellow Virginian, Si, asked for a brief history of the "woah." Actually, he wanted a book, so I'm recommending a series, Bruce Catton's. It just doesn't get any better. We are honored to have in our household the series Catton wrote that belonged to our friend Ron Erickson. 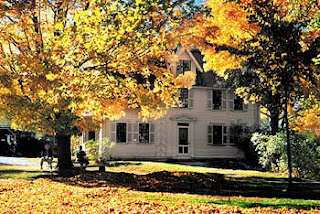 First, Si, Virginians created America. Even the Lost Colony was technically Virginia though it wound up as part of the Old North State. Pocahontas, Captain John Smith, John Rolfe. Jamestown, Williamsburg, Yorktown. Patrick Henry, George Mason, James Madison, Thomas Jefferson, George Washington. This is what I learned in Mrs. Katie Hiatt's 4th grade history. Nothing in my life dissuaded me from this basic understanding until Tom and I visited Lexington and Concord, Massachusetts, not North Carolina.

We went to the Old Manse (above, and grounds, below), family home of one Ralph Waldo Emerson. I wish I knew the name of the guide for she was a most knowledgeable and gracious woman. She was passionate about the history of this house, once rented by Nathaniel Hawthorne and his young bride. She pointed at the window where Emerson's grandmother stood, cradling Emerson's father in her arms, and watched the first shots of the Revolution.


My knees nearly buckled. No wonder they thought the Revolution was theirs! She stood with her babe in arms and watched the shots in her own backyard. 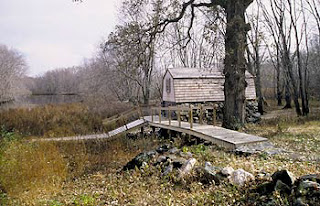 Thus, Si, the weight of this revelation hit me. America's Civil War is the ultimate sibling rivalry. Northerners thought the ideals of the Revolution, this newly forged nation, belonged to them. Southerners knew in certitude it was theirs. Then there was the bastard child--the black race--who cared not about the inheritance but who just wanted a place at the table. They just wanted to sit down beside us at the table of our father and mother.

We could not have fought so bitterly, nor wounded one another so deeply, were we not brothers and sisters.


Roman mythology defines the unique Great Seal of Virginia. The obverse of the seal features the Roman goddess Virtus standing over a defeated opponent. Virtus is dressed in Amazonian garb, and holds a spear and a sheathed sword. 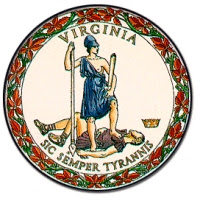 She represents the virtues of heroism, righteousness, freedom, and valor. She stands in a classical victor's pose over a fallen tyrannical foe, whose crown lies on the ground. The state's motto "Sic Semper Tyrannis" ("Thus Always to Tyrants") appears at the lower edge. The seal was approved at Virginia's 1776 Constitutional Convention, and the principal designer is said to have been George Wythe. A committee composed of Wythe, George Mason, Robert Carter Nicholas, and Richard Henry Lee collaborated on the design. In 1930 another committee was charged with standardizing the seal's design because of all the variations that came into use over the years. What the committee approved was basically adopting the 1776 seal as the standard. In 1949, another standard was implemented, when Virginia's Art Commission defined the official color scheme for the seal. From netstate.com
Posted by Deb Goodrich at 9:51 PM

Was born and got my raisin' in Pennsylvania but spent most of my life and my thinking years in Virginia. And claim it as my home.

Walking through the historic areas, you can feel the souls, the ideal and conflicts, of all of those who made our country great. Some time, go to the Lee Mansion and take one of the tours. The Park Service guides, as always, are great.

In Virginia, it is the War of Northern Aggression. A sort of reluctant participant, Virginia was invaded and Lee came home. "Our cause is lost." And the cause was the right to join The Confederacy and live in peace.