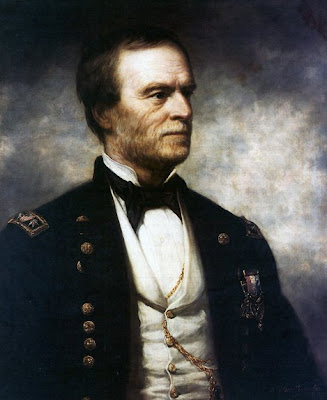 Sunday is the birthday of William Tecumseh Sherman--not high on my list, but not nearly as low as Nelson Miles or Phil Sheridan. . . .
The future pyromaniac was born on February 8, 1820, in Ohio. When his dad died, he was adopted into the prominent Ewing family. He and his foster brother, future general Thomas Ewing, Jr., would have an equal passion for torching Southerners--Ewing in Missouri and Sherman in Georgia.
Sherman did have a couple of redeeming qualities, however. He kept his troops from burning Raleigh in the aftermath of Lincoln's assassination, and he hated Edwin Stanton. As near as I can tell, these are two more than Miles or Sheridan.

Man, just when I thought it was safe to surf the web Sherman shows up on your blog. Well at least I know you will do right and have something interesting about JEB, Stonewall or RE Lee soon!