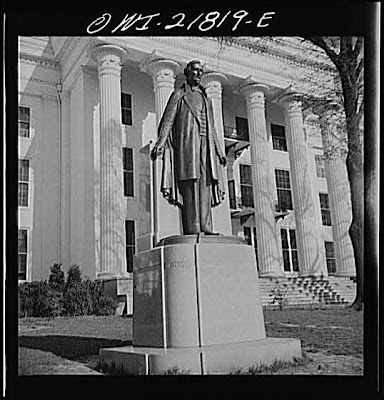 On this day in 1861, Jefferson Davis was inaugurated as provisional president of the Confederacy. Thousands of people gathered in Montgomery, Alabama, and watched him utter the historic acceptance speech that many believed, and some hoped, would take us into a full scale war. Notably absent from those observers was his wife, Varina, who was still in Mississippi deciding what to take with them and what to leave behind. Jeff loved being the center of attention; Varina wanted them to live quietly and "tend roses." That would never be.

I've been working on and off for years on a book on Mary Lincoln and Varina Davis, and last night, listening to Michael Burlingame inspired me to get back on it. He is a remarkable man and such a generous scholar--a man of many layers, and incredible insight. With the publication of his Lincoln biography, Michael has been much in demand for public appearances in this month of Lincoln. On two occasions, he and President Obama have been on the same slate. If I get in gear and get this book finished, perhaps Hillary and I could be at the head table together. . . or not.
Posted by Deb Goodrich at 9:46 AM

You really need to write your book on Varina and Mary. It is such a fantastic idea and you are just the person to do it Deb!

I am sooooooo jealous, you got to hear Michael Burlingame again, he is so fantastic. I am watching him right now on "Stealing Lincoln's Body" on History Channel. The 3-d recreations of Abe walking and moving are terribly moving and a bit creepy but interesting.

it's so rare to hear about the women in history...would love to see this book!