Everyone knows this is the birthday of Lt. Gen. Thomas Jackson, CSA (1824), but he shares this day with two other prominent Civil War era personalities--U. S. Vice President John C. Breckinridge (1821) who became a major general in the Confederate Army, and John C. Fremont (1813), "The Pathfinder," first Republican candidate for president, governor of Arizona, U. S. Senator from California, and major general in the Union Army. What a day!

One of my history professors, Dr. Gunnar Alksnis, taught history through biography. His philosophy was that the best way to comprehend an era is to grasp the life of its leaders. I believe he was right. The life of Fremont (pictured in bronze in the Frontier Army Museum, Fort Leavenworth, Kansas, above) is the very substance and form of America's expansion in the 19th century.

Today is also the birthday of one Robert Lee Hodge of Confederates in the Attic Fame. Born on Stonewall's birthday, and named for Robert E. Lee, Rob is actually an Ohio boy with Southern antecedents. He is the featured speaker at the Lee-Jackson dinner at the Grinter Place in Kansas City, Kansas, this Saturday. We were discussing his upcoming appearance when someone who has never met Rob inquired, "You mean the guy on the cover of that book?"

I laughed. "He's not really that scary," I promised. Rob became famous for perfecting "the bloat," the appearance of a dead, decaying corpse on the battlefield. Now a partner in Wideawake Films in Kansas City, he devotes his time to the other side of the camera. 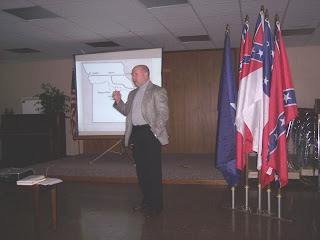 Speaking of our buds, Colonel Kennedy (left) was in town Saturday to speak to the local SCV Chapter. Ed's presentation on the battle and massacre at Centralia, Missouri, was excellent. He placed the atrocities committed by Confederate guerrilla Bill Anderson into the greater context of the war, with an escalation in war crimes committed by both sides. He discussed the meaning of "war crimes" and the Army's policies today and during the Civil War. This is an excellent presentation and so relavant to world affairs. Let me know if you have a group that would enjoy hearing this program and I'll get you in touch with the colonel.
Posted by Deb Goodrich at 11:49 AM

Deb-
Thank you soooooo much for remembering the birthday of my man Stonewall! I woke up today and my first thought was what would the war have been like had he lived. Of course I have a veritable shrine to the man in my home and am always adding to its collection. Glad to see that the premiere in Wamego was great. And...our favorite fellow Bobby Lee. What a great day to have a birthday.
Hope you are keeping warm! See you at the Capitol on KS Day!
Michelle