Let's hear it for Exploration

My friend Cheryl accompanied me to Fort Leavenworth yesterday. In fact, I dragged her kicking and screaming. Like many Kansans, she has never been to Fort Leavenworth and quite frankly, was just expecting a prison. (The U. S. Army Disciplinary Barracks is located here). She was floored by the beauty of the Post (especially the view of the Missouri River), the lovely historic buildings, the amount of housing (indicating lots of folks live there), and the size of the new Lewis and Clark Hall (home of the Command and General Staff College). She was also impressed with the brilliant people who work there (We visited D. K. Clark). 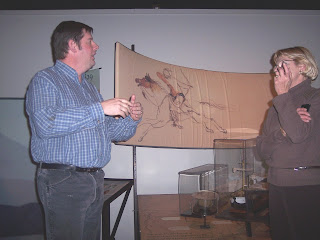 At the Frontier Army Museum, director Steve Allie (left, talking with Cheryl), who has been here since 1984, led us through the remodeled exhibit space. His enthusiasm for the museum and the collection is contagious. When asked what is so special about this museum, Steve doesn't hesitate to answer that its location is foremost.

"Here we are," said Steve, "on one of the oldest forts in the West, with the oldest residence in Kansas--just mention oldest anything in Kansas and we probably have it."

In the midst of historic Fort Leavenworth, founded in 1827 long before Kansas was even a territory much less a state, is the Frontier Army Museum with over 5,000 artifacts representing the presence of the United States Army in every aspect of frontier life--and much of it has little to do with making war. 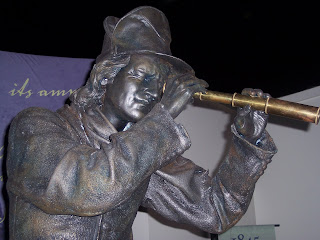 The general public may not realize how much of the early Army's work in the West involved exploration and map-making, with Lewis and Clark being the most prominent examples. The exploits of others are covered here as well, men like John C. Fremont (right, in bronze), a soldier and explorer turned politician. The tools of the trade are here--the survey instruments used to map the West and even the transcontinental railroad.
The staff has been remodeling -- including trashing the fluorescent lighting and installing more exhibit-friendly bulbs. It has also taken artifacts from the walls and moved them out into the visitor space where they can be more easily seen, though still protected. Some projects are a little behind because Steve does so much of the work himself, welding, for example, and the weather has been too nasty to go outside. All the macro-artifacts, as Steve refers to them, are in place, and now they will begin bringing out the smaller items to round out the displays.
The variety of the displays surprised Cheryl. "I expected machine guns," she said sheepishly, "but the museum was rich with history. It was amazing."

It certainly is. For more information, visit http://usacac.army.mil/CAC/csi/museum.asp. Better yet, go in person.

On this day in 1779, Zebulon Montgomery Pike was born in Trenton, New Jersey. (Have you ever seen a more beautiful man? I swear my next book will be Historic Hunks.) Often over-shadowed by Meriwether Lewis and William Clark, Pike led the expedition searching for the source of the Mississippi River and then another exploring the southern portion of the Louisiana Purchase. His journals from this trips are worth reading.
This bright and promising officer died during the War of 1812 at the age of 34. He led an assault on York, Canada, (now Toronto) and died with a captured British flag under his head for a pillow. Find more about this incredible American at zebulonpike.org. The monument to Pike (below) stands in Republic County, Kansas, along his route of exploration. 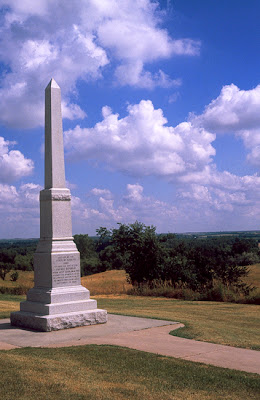