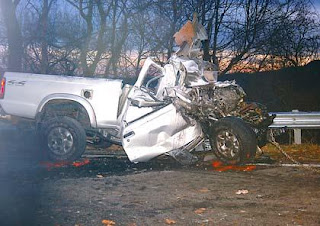 I was on the phone with my Aunt Emma Lee in Ararat, Virginia, last night and her husband had just come in and said there was a bad wreck on Lowgap Mountain. She was listening to WBRF Radio, Galax, and when we got off the phone an hour later, the newsman said Hwy 89 had been shut down and traffic was rerouted on I-77.
Folks in metropolitan areas don't realize how news of wreck touches people back home. It is almost always someone you know. The route down Lowgap is narrow and very busy and we have so much family up and down that road every day.

Turns out the story was a typical one back home-a tractor trailer going down the mountain lost its brakes and slammed into another vehicle. How many of these stories did I cover when I was a reporter? Fancy Gap Mountain was the worst, so dangerous that trucks were forbidden from the steep grade once the interstate was completed. That didn't stop trucks from trying it, though, mostly overweight vehicles avoiding the scales. Many of these trips ended in tragedy, with crushed vehicles, mangled bodies and loads of cargo strewn down the mountainside. A friend of mine recalled a load of produce that wrecked in Tate's Curve, leaving thousands of grapes atop the Tate family's house.

Laura Thompson, of the Mount Airy News, filed this report in the morning's paper:

LOWGAP - A Galax, Va., man was killed Wednesday afternoon and another man was hospitalized following a fiery three-vehicle wreck on N.C. 89 West just south of the Virginia state line. A tractor-trailer driven by Marvin Patton, 53, of Houston, Texas, was traveling south on N.C. 89 when its brakes failed and it crossed the center line at a sharp curve on the mountain road, said Trooper J.R. Vindich of the N.C. Highway Patrol. The incident occurred just before 4:30 p.m.

The tractor-trailer collided first with a Nissan pickup truck and then with a Chevrolet van before hitting the side of a mountain and catching fire. Vindich estimated the tractor-trailer was traveling at 65 mph on impact. The driver of the pickup truck, 68-year-old Glenn Roy Shumate of Galax, died instantly, Vindich said. The two occupants of the van were uninjured. Patton escaped from the cab of the truck before it ignited and was treated at Hugh Chatham Memorial Hospital in Elkin for minor injuries. 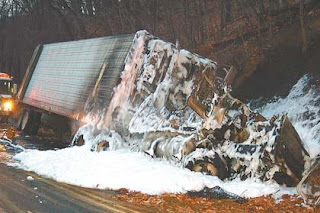 Members of the Skull Camp Volunteer Fire Department arrived within about five minutes of the accident to find the cab of the tractor-trailer fully involved in flames. Capt. Josh Moose said an explosion from one of the fuel tanks started a small woods fire on the side of the mountain. Vindich said Patton was hauling potatoes from Michigan to Charlotte and was instructed by his company to get off I-77 at the U.S. 58 exit in Virginia and take Highway 89 into North Carolina. He said Patton was told this was a faster route.
Marvin was released from the hospital around 10 p.m. Wednesday and charged with death by motor vehicle, exceeding a safe speed and driving left of center. He remained in the Surry County Jail Wednesday night.

Vindich praised the efforts of Skull Camp firefighters in extinguishing the flaming tractor-trailer as well as the Mount Airy Rescue Squad, who he said are “always A-plus on their game.”The Galax Fire Department also assisted at the scene.

I can't help but think of all the phone calls made last night, delivering tragic news. I can't believe a dispatcher in Texas told this truck driver it was closer to go down Hwy 89. Even if that were so, we have interstates for a reason, to keep that long distance traffic off local roads. These drivers who don't know the mountains, don't know where the curves are, and don't realize how quickly they can lose control--I could fill a fifty-five-gallon drum with such reports.
________________________________________ 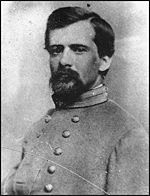 More Birthdays
Today is the birthday of one of the South's handsomest soldiers, Gen. John Pegram. Pegram was captured early in the war, released and jumped back into the fight. He is perhaps best known for his marriage to the prettiest girl in the South, Hetty Cary, on January 19, 1865.

Just three weeks later the groom was back inside the same church in a coffin--his lovely widow kneeling by her fallen husband. His brother was killed shortly after. Hetty lived with her mother-in-law after Pegram's death. This touching letter of condolence was sent to Hetty:

I cannot find words to express my deep sympathy in your affliction, my sorrow at your loss. God alone can give you strength to bear the blow he has inflicted, and since it has been death by his hand I know it was sent in mercy. As dear as your husband was to you, as necessary apparently to his Country and as important to his friends, I feel assured it was best for him to go at the moment he did. His purity of character, his services to the Country and his devotion to his God, prepared him for the peace and rest he now enjoys. We are left to grieve at his departure, cherish his memory and prepare to follow. May God give us his Grace, that through the mediation of his blessed Son, we may be ready to obey his gracious Summons.
Truly and affectionately your friend
R E Lee
Petersburg 11 Feb '65

Hetty was a widow for 14 years, before marrying physiologist Henry Newell Martin, who worked at Johns Hopkins University. She died in Baltimore in 1892. 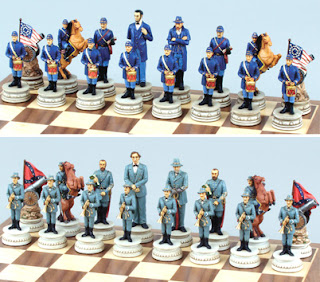 O.M.G., that accident sounds horrible. I feel so bad for those families.

Yes, Bryron, so do I. I just wish trucking companies would get the message about how dangerous the roads are and keep trucks off those roads. I'm sure you have some grades that are pretty dangerous, too.

So sad to hear about. Did you know about the plane crash in Mount Airy on Friday?

Hey, man! Thanks for that referral to that awesome chess board site! My grandparents really love it. Everytime I go over there, they always bring it out for some good old family fun.