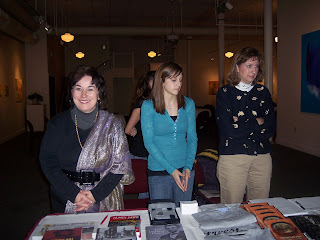 Cheryl and I braved the cold tonight (I think it bottomed out at minus 6) and headed west to the hamlet of Wamego, home of the Columbian Theater and Ramblers Steak House. At the latter we enjoyed the company of the townsfolk before heading over for the screening of "Bloody Dawn." There was a capacity crowd and great discussion. We enjoyed seeing Kelly Fein whose husband, Joel, was a producer of the film but died before it was completed. It is dedicated to his memory. 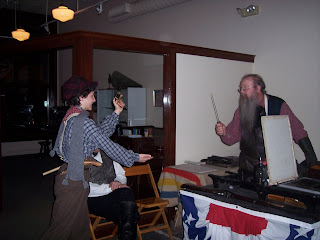 Cheryl snapped this photo of my selling books along with Amy Spurgeon and her lovely daughter.

A highlight of the evening was Missouri "Puke" Ed Hoover heckling Senator Jim Lane. Between heckles, Ed demonstrated his 1850s era printing press and the Sharps carbine that went along with operating a press. It was dangerous business to be an editor in those days. Above right, Ed defends his first amendment rights against a young man armed with a pepperbox pistol.
The next showing of "Bloody Dawn" will be in Lincoln, KS, during the annual Lincoln Days. Tom and I will be there along with the film's director, Ken Spurgeon, and historian Marla Matkin. Our friends and neighbors Herschel and Jacque Stroud will be there as Abe and Mary Lincoln. Herschel is not quite as tall as the 16th president, but makes up for it in personality! It should be a great weekend, February 15 - 16. See http://skyways.lib.ks.us/towns/Lincoln/abeday.html for more details.
_______________________________________
From the Civil War Listserve
(hosted by Andy Waskie)

There were only two Union soldiers who were present at both Fort Sumter and Appomattox Court House. They were Truman Seymour and Pennsylvania’s own Samuel W. Crawford. Both had long careers in the army and both were generals of some accomplishment. Both men are undeservedly obscure. 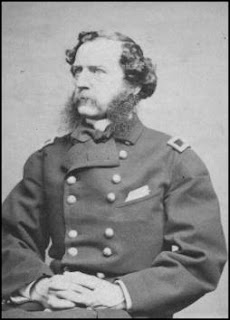 Over a hundred years ago author Sydney George Fisher asked of Pennsylvania, “Was there ever a Commonwealth that produced so many eminent characters and was so indifferent to them?” Retired history teacher Richard Wagner attempts to remedy this with his For Honor, Flag, and Family: Civil War Major General Samuel W. Crawford, 1827-1892.
Wagner spent 12 years researching Crawford, and it shows. He has unearthed letters and diaries that have lain dormant for decades. The result is a biography that is a bit different from the usual ones of Civil War figures. It is unusually rich in personal details and background information. Wagner spends a good number of pages on Crawford’s early life and his relationship with his parents and siblings. Crawford had a close connection with his family. His younger brother Alex would even be his war-time aide. Crawford was born at the family home Allandale near Fayetteville in Franklin County to a father in the ministry. He never married and would return time and time again to his family home set in the beautiful mountains. The title of the book is very appropriate since Crawford’s family played such an active role in the choices he made throughout his life. Instead of following his father into the ministry, Samuel chose to help mankind by becoming a doctor. He studied at the University of Pennsylvania and was an excellent medical student. After graduation, the patriotic Crawford felt he should serve his country in the army and so became an army surgeon. He had a powerful intellect, but what some perceived as arrogance rubbed many the wrong way. This trait would unfortunately follow him into the army and cloud his reputation.After some years on the frontier he found himself assigned to be the post surgeon to about 80 men at Fort Moutltrie in Charleston harbor in 1860. He was present as an observer at the secession convention and watched hopelessly as hostile forces surrounded the fort. The commander Robert Anderson won his everlasting admiration when he showed the good judgment to withdraw to the more defensible Fort Sumter six days after secession. Crawford was there throughout the siege. When the Confederate forces finally bombarded the fort on April 12, 1861 Crawford did the very un-medical duty of commanding a cannon in one of the casemates firing back in the hopeless fight. Wagner covers this time in Crawford’s life very well, and one can almost feel the tension that Crawford must have felt waiting for the inevitable.Crawford transferred to the infantry after tasting combat when he returned to the North. He served briefly as an aide to General Rosecrans in the West Virginia campaign but was soon given command of a brigade. In his first action his brigade almost over-powered Stonewall Jackson’s whole force at Cedar Mountain. Eventually reinforcements drove him back, but he did well in his first combat command. At Antietam he suffered a controversial wound. He received a puncture wound from what probably was a shotgun blast in his thigh. Crawford left the field. Many criticized him for doing so because they thought the wound was too superficial. This was unfair because the wound would trouble him for the rest of his life.After spending some time recovering, Crawford was given command of the Pennsylvania Reserves Division. The division was itself recovering from heavy casualties during 1862 and was assigned to the quiet sector of Washington D.C. All of that changed with Lee’s invasion of Pennsylvania. Crawford and his reserves were sent to the Army of the Potomac. The high-point of his career came at Gettysburg. Near the close of the second day of the battle, Union forces were being pushed out of the Wheatfield towards Little Round Top. 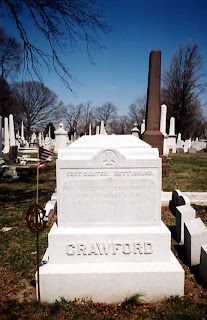 Crawford’s division appeared on the crest of that famous hill. Wagner writes, “Crawford showed his energy and zeal when he grabbed the Reserves’ flag and led the charge on horseback.” Charging into the “Valley of Death” the Reserves threw back the Confederates and saved the Union left.Continuing with the Army of the Potomac Crawford fought in the Overland campaign and was witness to the horrible battles of the Wilderness and Spotsylvania. The only real bright spot was when his division got behind Pickett’s force at Five Forks and captured many men. He fought throughout the final campaign and was present at Appomattox Courthouse.After the war, Crawford kept focusing on what he viewed as his two great accomplishments: Fort Sumter and Gettysburg. He kept reliving them. He even bought land in the “Valley of Death” to serve as a monument to himself and the Reserves (eventually this was given to the government). Some saw this as taking too much credit for what he did. This fit into the pattern of vanity he showed at times. It is understandable in some ways, but Crawford would not be memorialized the way other soldiers would be who had endeared themselves to the men as did Grant. He was too much an aristocrat for our democratic society. It was only 125 years after the battle that a monument to him was finally erected at “Crawford Avenue” at Gettysburg.Crawford died in 1892 and is buried in Laurel Hill Cemetery in Philadelphia (above, left). He made sure two things were placed on his grave, “Fort Sumter” and “Gettysburg.” Wagner’s excellent book does a lot to rescue Samuel Crawford from obscurity. One can read the book for the interesting story of Crawford’s life but also perhaps to honor one of our own: a true Pennsylvania Civil War hero.