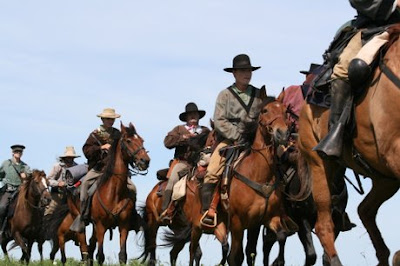 Headed to Fort Leavenworth today; Tom has a video crew coming, I believe. Everyone is looking forward to this weekend's premier of Bloody Dawn. From Sunday's Topeka Capital Journal:
Film takes look at effect of Quantrill's raid
By Steve Fry
The Capital-Journal
Published Sunday, January 06, 2008

Civil War raider William Quantrill will ride into Lawrence again when "Bloody Dawn," a documentary about the burning of the anti-slavery bastion in 1863, is shown in a theater next weekend on the same street Quantrill and his guerrillas rode on.
Based on author Tom Goodrich's book of the same title, "Bloody Dawn," will be shown Saturday at Liberty Hall.

"This was the invasion and destruction of the state's second-largest city," Goodrich said. At the time, Lawrence had a population of 3,000, and the largest city was Leavenworth with about 20,000 residents. "It took a century for Lawrence to fully recover."

Movie-makers last year interviewed the husband and wife team of historians Tom and Deb Goodrich on the patio of the couple's Collins Park home in central Topeka about the Lawrence raid.

In the raid on Aug. 21, 1863, 150 townsmen and Union soldiers were massacred and much of Lawrence was burned. One of Quantrill's roughly 450 raiders was dragged off his horse and killed.

The Lawrence raid was payback by Quantrill for the deaths of five women who were relatives of Confederate guerrillas, Tom Goodrich said. The women were killed when the rickety Kansas City, Mo., hotel they were imprisoned in collapsed, he said. Days after the prison collapse, Quantrill organized the raid on Lawrence.

Deb Goodrich said the killing of the victims in front of their families and the burning of the town was "devastating" to survivors.

On the morning after the raid, one woman was looking for her husband when she screamed after finding him in the ashes, Deb Goodrich said. She crouched and cradled his skull in her hands, she said.

"To lose a loved one in such an incredible act of violence would intensify memories" of the raid, Deb Goodrich said. For the rest of the survivors' lives, the smell of smoke and certain sounds "would bring back the horror of that day. Lawrence is like a microcosm of the Civil War."

The town of Brooklyn near Baldwin City was destroyed in the same raid and was never rebuilt, Tom Goodrich said.

Philosophically, Quantrill represented those people who didn't fit into the system and were striking back, Deb Goodrich said.

Among Quantrill's ranks were bank and train robbers Frank and Jesse James and the Younger brothers.

Deb Goodrich also wrote "Stories in Stone: a Sharing of the Lives of Some Who Rest in Topeka Cemetery."

. . . we hope you celebrate appropriately, perhaps with a peanut butter and banana sandwich. 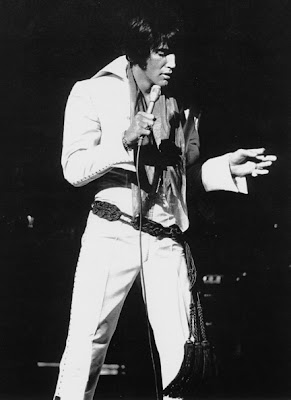