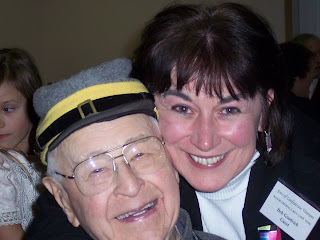 It is an intereresting group of folks. Some come in their Confederate uniforms, some in sports coats, some in the civilian garb of the 19th Century. All but a few, including my friends, Ken and Terry Hobbs, have Confederate ancestors--men who fought for the Southern Confederacy.

There is a kinship in the Sons of Confederate Veterans that is religious. Candles are lit as each person recites the company, regiment, and fate of the soldier from whom they are descended. It is a moving and startling ceremony when nearly every person in the darkness lights a candle and announces, "in memory of Private Henry Bowman, 50th Va. Inf., captured at Culp's Hill, imprisoned at Fort Delaware, imprisoned at Point Lookout. . . . in memory of Simon Bolivar Buckner, Lt. General, CSA. . . . in memory of Jefferson Davis, President, CSA."

Folks who know little of their ancestors are floored by people who can recite chapter and verse of their long dead relative's military service. In fact, when I am pressed to define what is unique about Southerners, I am inclined to suggest it is this: We know who we are--we know who our people are. 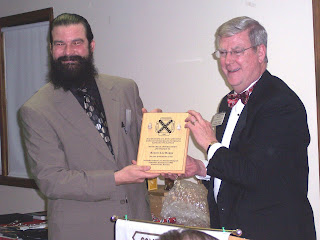 Our speaker last night was the most famous reenactor in the nation, Robert Lee Hodge. Rob, full beard and all, is passionate about battlefield preservation and shared that passion with this very enthusiastic crowd.

He is pictured (above right) with Jim Speicher, Commander of the Key Camp in Kansas City. You'll also find Rob on the cover of America's Civil War with an article inside on his experience as the subject of the Pulitzer prize-winning, Confederates in the Attic.

Pictured top left is my boyfriend, 98-year-old Loren Lundy and me. Loren's antecedents are Virginians, maybe even my cousins, living near Galax. Loren and his lovely wife, Meta, and daughter, Sharon, are longtime friends and it was wonderful to see them.
Posted by Deb Goodrich at 10:25 AM

Oh my gosh Deb!
That Robert Lee Hodge is such a handsome fellow! I think I like him live better than bloated though! Thanks for blogging about him, he is quite a character, glad to call him a friend!
Michelle