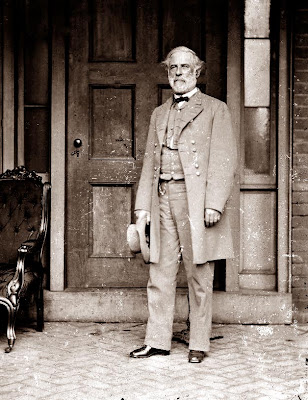 April is such a sad month in Civil War history, even more so if you're of the Southern persuasion. This may be the saddest, however, as Marse Robert issued his final, eloquent order. I can scare read it without weeping and know legions who feel the same. Please take the time to read this. While it is a military order, it is the most heartfelt, sincere, prayerful sentiment, and so much a reflection of the man who wrote it:
Commanding Army of Northern Virginia.
GENERAL ORDERS No. 9.
HDQRS. ARMY OF NORTHERN VIRGINIA,April 10, 1865.
After four years of arduous service, marked by unsurpassed courage and fortitude, the Army of Northern Virginia has been compelled to yield to overwhelming numbers and resources. I need not tell the brave survivors of so many hard-fought battles, who have remained steadfast to the last, that I have consented to the result from no distrust of them. But, feeling that valor and devotion could accomplish nothing that could compensate for the loss that must have attended the continuance of the contest, I determined to avoid the useless sacrifice of those whose past services have endeared them to their countrymen.
By the terms of the agreement officers and men can return to their homes and remain until exchanged. You will take with you the satisfaction that proceeds from the consciousness of duty faithfully performed; and I earnestly pray that a merciful God will extend to you his blessing and protection.
With an increasing admiration of your constancy and devotion to your country, and a grateful remembrance of your kind and generous considerations for myself,
I bid you all an affectionate farewell.
R. E. LEE, General.
_________________________________________________________
Bluegrass Tonight
. . .at the Classic Bean, Fairlawn Plaza, Topeka. Pastense will be playing and they make an espresso martini to die for!!!!
__________________________________
Invitation to a Raid 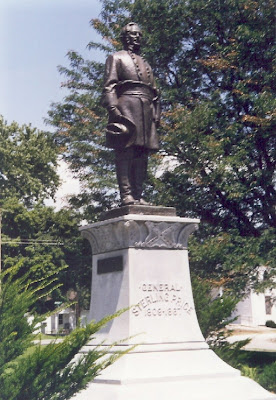 . . . as a Southern Belle of questionable reputation, I get the most interesting offers. I won't repeat the entire invitation, but for the weekend of May 15-17:

To Arms! Oppose the Invaders!""Guns and Horses for General Price!"
Our story is simple and accurate. We are time period correct and authentic to the very region. We're not necessarily Pro Secession. We're more Pro Missouri. We wanted to remain neutral, but the invaders were pushing us and continuing to prosecute their terrorism against us. With the election of Lincoln, the people of Illinois supposed it their divine right to ride into Missouri and destroy or carry back whatever they saw fit. And from Iowa too. Jayhawkers you don't hear much about. You don't hear about that part of the war, not because they didn't do it. You don't hear about it because they were so good about covering it up. Too the Victor go the Spoils and so forth.

If you and your girls want to come along, I don't see why we couldn't get you setup
somewhere in the camp. Your most obedient servant. . . ,
Now I ask you, when did you get such an irresistible offer?
(Statue of General Price in Keytesville, MO)
Posted by Deb Goodrich at 9:11 AM

RE Lee was a wordsmith as well as a fine human being. It bring tears to my eyes to read his surrender, he cared so deeply for Virginia and the men that had served the Cause. His sentiments are palpable. And as for that invitation...well, how could a girl refuse such a fine offer!

I can't imagine what it felt like to have served under Lee and to hear those words read out loud. The emotions they must have felt as they stood there feeling such defeat as the greatest leader in military history released them of their duties. Wow...