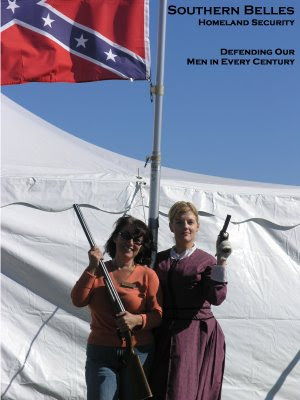 Michelle Martin and I were on the phone catching up for a while this morning and started reminiscing about our Glory Days (which are still in progress, I might add) and decided we're going to do a remake of our popular Homeland Security photo made 3 or 4 years ago at Mine Creek. Perhaps we'll get the chance at the Battle of Black Jack reenactment that's coming up. Yup, protecting our men in every era--that's us! (PS -- that's me with the shotgun!) 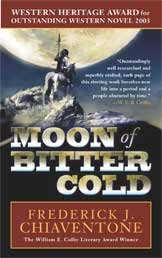 Michelle has been busy scouting shooting locations for NBC. I've been searching for experts on various topics for another film project. Gosh, we know some wonderful, creative people. Speaking of which, talked with Fred Chiaventone today (and his lovely and talented wife, Sharon). Fred's always full of projects and his book, Moon of Bitter Cold, will become a mini-series. Fred, as I have said before, is one of my top five favorite writers and Moon is one of my top five favorite books. The thought that these characters--Margaret Carrington, Jim Bridger, Red Cloud--will come to life on the big screen is so exciting I can hardly stand it! The same producers who were involved with Lonesome Dove are putting the project together which gives me great hopes it will done as well as the Larry McMurtry novel (one of the best screen adaptations ever). 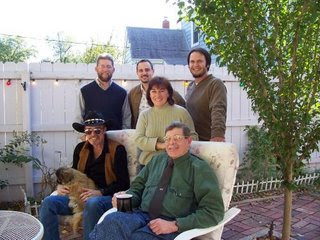 Speaking of film projects, Ken Spurgeon of Lone Chimney Films checked in today. His kids were competing at History Day here in Topeka. He said that the film Bloody Dawn, which includes moi, as well as Fred Chiaventone and Michelle Martin, will air on PBS soon. Will keep you posted.
Back when Bloody Dawn was being filmed, some of the shooting was done at my house. On the patio, front row: Drew Gomber (of Wild West Tech Fame); me, Fred Chiaventone; back row: Ken Spurgeon, Nathan Miller, and Jon Goering.
Tonight, headed for a "Barn Party" in Lawrence with dear friends and great music. . . if the tornadoes don't get the best of us. Betty Lou Pardue just cancelled on our plans because she got called into the TV station.
Life can be pretty darned exciting.
Posted by Deb Goodrich at 4:16 PM