Happy Birthday to the Hag 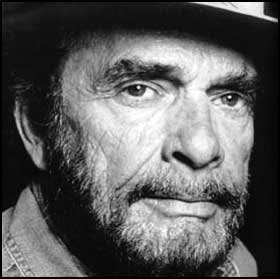 Country music legend Merle Haggard was born this day in Bakersfield, California, in 1937. The son of Okies who migrated to the promised paradise of the Golden State, Merle's home was a converted boxcar and his dad died of a brain tumor when the boy was only 9. His biography is too unbelievable and rich to edit or shorten, so visit this site and read the entire entry:
http://music.aol.com/artist/merle-haggard/biography/1001366

That face pretty much tells the story. 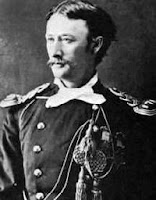 On this day in 1865, General Robert E. Lee and the Army of Northern Virginia lost its last battle at Sayler's Creek. One of the significant events of this hard-fought battle was the second Medal of Honor awarded to Tom Custer (right), George Armstrong's younger brother.

Tom Custer was the very first to win the Congressional Medal of Honor twice. His first was for action near Namozine Church, Virginia on 3 April 1865 and his second was for action at Sayler's Creek, Virginia on 6 April 1865 - three days apart. Not so astounding when you consider Brother George was the recommending officer (not to detract from Brother Tom's gallantry and courage). (from genforum.genealogy.com)

Thereafter, whenever Tom showed up at an event wearing the medals, George referred to them as his "baubles." 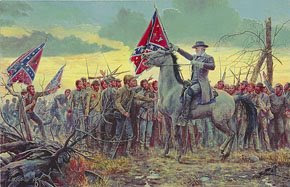 For those of us who are Southerners, the story of Sayler's Creek is wrenching. With all the obstacles Lee faced--weakened, outnumbered forces being the greatest--he fought, hard, and his men fought, hard.
Three days later he would surrender to General U. S. Grant.

Tom and I visited Appomattox Courthouse, the surrender site, on our honeymoon. Since I was a Virginian, he assumed I had been there many times.