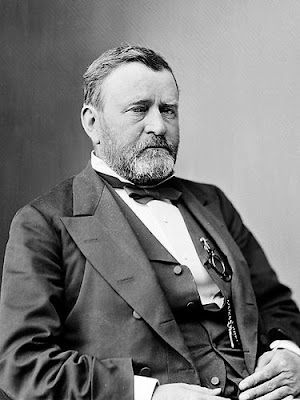 But then I visited his home near St. Louis, or rather the family home of his wife, Julia Dent. 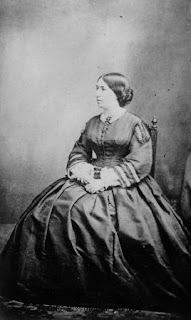 Julia came from a prosperous and influential and rather "Southern" family. She was also cross-eyed. (Do you remember when kids wore patches to make their "lazy eye" stronger? We never see cross-eyed people any more. )

Grant, then Ulysses Simpson Grant because of a registration mistake at West Point, fell deeply in love with her. Even though totally devoted to the man's daugher, Grant encountered endless humiliation from his father-in-law and put up with so much crap because he loved that woman so profoundly.

The victor at Appomattox, the president of the United States, at one time Grant was the most beloved figure in America. When he was president, his father-in-law sat on the porch and entertained guests with the feats of Robert E. Lee. Grant should have shoved him under a passing coach, but no, he tolerated the old man because he loved Julia so dearly.


What a lucky woman to find a man whose deeds matched his actions, at least when it came to her.

While wandering in the wilds of the West yesterday, Michelle Martin snapped this photo of the wild weather. Whoa, Nellie! 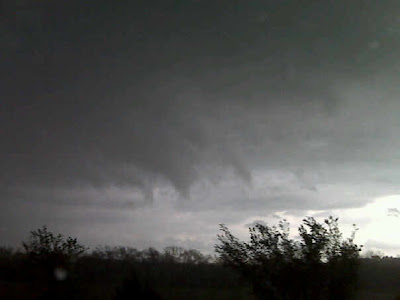 Grant is one of my heroes. As is Marse Robert. Every time I read of long simmering unrests - Irelend, Bosnia, et. al. - I thank these two for what they did, plus Sherman and Johnston, to end our War as well as they did. Grant was a knight in a shining corporal's blouse.

I'll have to admit that when I saw the title and the first picture on this post my countenance dropped. I'm glad you posted it though because I have never studied Grant that much. I don't think we were allowed to have any books with his name on them in our house. ;)

On an interesting side note: the word verification to post this comment is: hersin, do you think there is some hidden message there?