The last few days have been hectic, literally and historically. From bluegrass to assassination, it's been a busy April.

Sue Ann Seel and I again visited the Little Grill near Manhattan where Chris Biggs and Steve Hinrichs were playing. Folks, they are so good and that little Jamaican grill has just about the most interesting eclectic decor I've ever seen(outside my own house, of course). From bait bucket light fixtures to grass-skirted overhangs, it screams "good time" when you walk in the door. They also have absolutely the best waitstaff in the world. Try it sometime, but especially on Wednesday evenings when Chris & Steve are playing.
On the 14th, Andy my Yankee informant, emailed to remind me that this was indeed the day Lincoln had been shot in 1865. Does he think I need reminding, for Pete's sake? Anyhow, he was indeed correct, and the 15th is the day Lincoln actually died. By the 16th, it was Easter Sunday and folks referred to it as "Black Easter." Cities, homes--the entire country were draped in black. This story has fascinated me endlessly, as well as countless others, and I was privileged to speak in Philadelphia a couple of weeks ago with a group of folks including Gary Grove. Gary is a wonderful, generous man who has made quite a bit of news of late. He is the scientist who has been contacted about examining Lincoln's DNA from a blood stain owned by a Philadelphia museum. Well, I happen to know those museum folks as well. Read more at : http://www.philly.com/inquirer/front_page/20090413_Lincoln_s__Shroud_of_Turin_.html I gotta tell ya, that Hugh Boyle tells of an encounter he had with a skunk one time that just about tops anything Jerry Clower entertained audiences with. I wouldn't begin to recount it; just ask him to share it with you sometime.
_________________________________________
Bob Gordon Theater
I want to write now of happier things. Time Tunnel is on television. I remember it would come on Sundays as part of the lineup on Bob Gordon Theater on WSJS in Winston-Salem. Bob was a local celebrity, a ventriloquist who would interview local folks between episodes of classic TV shows. We would often be at Grandma and Grandpa Coalson's house and Grandpa would be enjoying his Dr. Pepper. These were good times. We didn't talk very much--my sister, my brother, my Grandpa and me, but we laughed together. 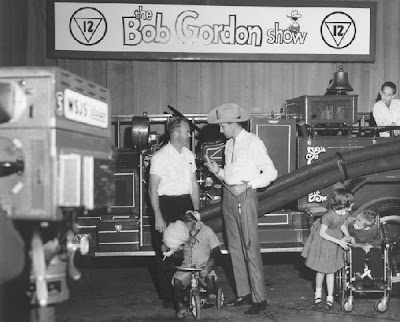 I remember Bob Gordon! Used to love all those old shows he'd put on. Hated sports preempting him on the weekend! Remember "The Champions" and "High Chapparel"?

I never missed the Bob Gordon theatre. By the way I have a great Uncle named Frank Coalson, my Grandmother was Sara Jane Coalson from Mt Airy.