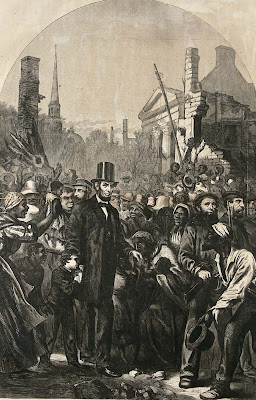 On this day in 1865, Abraham Lincoln entered Richmond.

The city lay in ruins; the smell of tobacco, turpentine, and whiskey filled the air. Smoke still clung to bricks and half-standing walls. There had been a miscommunication, so no carriage was on hand to escort the conquering president. Instead, he walked up the hill from the docks to the White House of the Confederacy. As word spread, throngs of blacks followed him, bowed before him. He was embarrassed, told them that wasn't necessary. It was warm. He took off his coat and carried it. Government documents fluttered past him, papers bearing the signatures and seals of a country that no longer existed.

Houses along the way were quiet, the shutters tightly closed. White Richmonders had dreaded this day, had hoped it would never come. Now they sat in warm, darkened parlors waiting for the terrible moment to pass. Meanwhile, Lincoln sat in the chair of his rival, Jefferson Davis. He sat quietly, keeping his own counsel, soaking in the moment he had sometimes thought would never come.

Perhaps this day, more than any other, signaled the war was over. Everything that followed was formality, even General Lee's surrender. It had taken them four years to go 100 miles, but the Yankees had captured the Confederate capital. 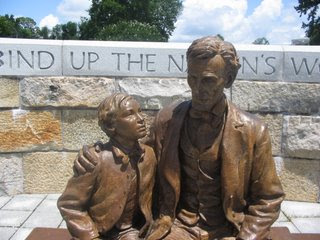 Now a statue recalling that day is located at the Civil War Visitor's Center in Virginia's capital city (left). The road to placing it there was nearly as rocky as the war itself. Many Virginians felt it was like rubbing salt in the wounds of the vanquished, while others thought it is time to put the War behind us. The quote behind the statue, taken from Lincoln's second inaugural address, instructs us to "bind up the nation's wounds."

It is a slow, slow process.

(Tom said I should just rename this the Lincoln blog, but I'll swoney, if it's not impossible to talk about the War without mentioning Lincoln!) 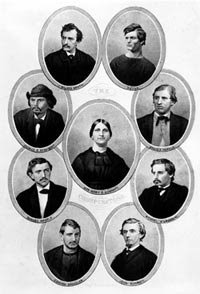 Pennsylvania--Not content with trying and hanging the Lincoln conspirators (left) once, our friends in Yankeedom enjoy this so much they're doing it again at the Conference Center of the Luzerne County Community College in Nanticoke on April 14. The production is being sponsored by The Lindhill Institute and hosted by the college as part of their Open House Day. The event is free and open to the public.

Beginning at 1:30 p.m., the presentation will consist of dramatic selections from the Lincoln conspiracy trial of 1865. Featured within this part of the program are portrayals of some of those who were in Ford’s Theater on the night of the assassination; soldiers and civilians who testify on the “general conspiracy;” and, in a featured presentation, the testimony of Louis Weichmann, an eyewitness to many of the events leading up to the assassination of the sixteenth president.

Earlier in the day, a Civil War Living History scenario called “Meet The Generals” is scheduled for 10 a.m. It is enacted by the Confederation of Union Generals ( COUG), a Lancaster-based living history organization that is one of the fastest growing organizations of its type on the East Coast. “Meet the Generals” will allow the public to interact with and ask questions of portrayers of Major General William Sherman, Major General George Meade, Major General John Reynolds, Major General Godfrey Weitzel, Major General John Gibbon, Brigadier General Rufus Ingalls, and other equally important Union officers regarding their conduct, duties, and participation in the war. (For an image of these handsome officers, see my blog of 2.28.07 "Weather Gods.") Visit http://www.lindhill.org/ for more on this event. 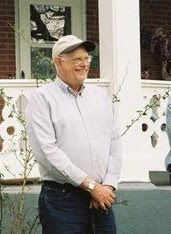 Missouri--In anticipation of the sesquicentennial of the War, folks in Waverly hope to find the foundation of the home of General Joe Shelby. Archaeologists, including our friend Doug Scott (right), were on hand last week to look for the remains of the house that was torched by Yankees early in the war. Scott was on his way home to Nebraska from his second trip to the battlefield at Centralia, where he is pursuing forensic work. He noted he was "only a visitor" to the Shelby site, but added that he was raised in Missouri and was happy to be in Waverly to lend his support to the project, because, "(Missouri) stays in your blood." 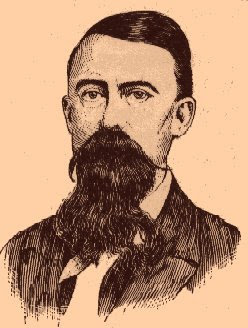 Tim Baumann of Missouri Valley College's anthropology department hopes to uncover the first home of Confederate General Joseph O. Shelby on a rocky hillside overlooking the Missouri River. The house was built by Shelby (left) in 1858, just before his marriage to 16-year-old Elizabeth Nancy Shelby, a distant cousin. The ultimate goal of the project, said Baumann, is "to get Missouri, and the part it played in the Civil War, on the map." The Show-Me State's role in the Civil War is often overlooked, despite the many battles (by some counts, more than 1,000) fought within its borders.

Per your request for info, the Dub Taylor documentary will premiere on April 14th. Other distribution still TBD, but if you're not doing anything next Saturday, we'd love to have you! Information on our Blogger :)