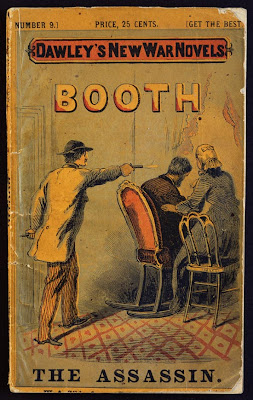 It was on this day in 1865 that John Wilkes Booth was shot and killed--by the lunatic "Boston" Corbett. Corbett, who castrated himself and moved to Kansas (at least one of those indicates he was a nutcase), has a life you couldn't make up--even if you wanted. Tom has written extensively on both so visit his website to read more. Tom was also a part of the recent documentary "The Search for John Wilkes Booth." We've spent countless hours in the Library of Congress researching the assassin. If I could sit down to dinner with any family in history, it would be the Booths. No, I do not condone the action of John Wilkes; the assassination of President Lincoln was the worst possible thing for our entire country, North and South. But I don't believe Booth was a devil. Nor was he necessarily representative of his family's politics. Living in Maryland, a border state, the Booths themselves were divided in their loyalties.
Brother Edwin (right, in a theatre poster) was a staunch Unionist, for example, and saved the life of Robert Todd Lincoln during the war. The Booth children had been brought up to think independently and to express themselves. They were a strikingly beautiful lot, dramatic, well-read--in short, interesting. I can't imagine a more lively dinner table, before the assassination, of course. Afterwards, the family was devastated by their brother's actions. (Tom discusses this in The Darkest Dawn. )

Even if he remains a despised figure, Booth is a pretty popular subject. Our friend John Sellers, Civil War Curator and Lincoln Specialist, LOC, was staying with us the past couple of days. We were discussing Manhunt, the bestselling book by James Swanson. The movie rights have been bought and the film will star Harrison Ford, not as Booth but as a detective searching for him. It is rare that history sells so well and that movie rights are involved. We had the pleasure of speaking on the same program with him in Clinton, Maryland, just a year ago at the Surratt Society's annual symposium. He's a great guy and a good historian. Kudos to Swanson! 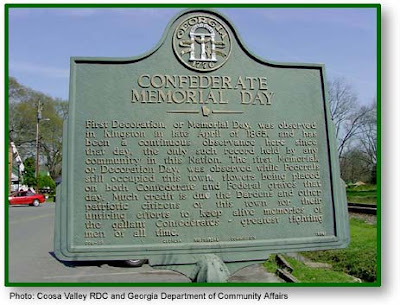 At left is a photo of a Georgia State Historical Marker. The text reads:
CONFEDERATE MEMORIAL DAY
First Decoration, or Memorial Day, was observed in Kingston in late April of 1865, and has been a continuous observance here since that day, the only such record held by any community in this Nation. The first Memorial, or Decoration Day, was observed while Federals still occupied this town, flowers being placed on both Confederate and Federal graves that day. Much credit is due the Dardens and other patriotic citizens of this town for their untiring efforts to keep alive memories of the gallant Confederates -- greatest fighting men of all time.

There are many Confederate Memorial Services the last weekend of the month. Here is one, and feel free to send notice of others:

On April 29, a ceremony will take place to honor known veterans buried in the Forest City, Missouri, Union Cemetery. Planned for 2 p.m. by the Holt County Historical Society, the service will recognize the traditional Confederate Memorial Day that was set aside on the last weekend in April by several southern states. The purpose was to pay tribute to those who had served with the Confederate forces during the American Civil War. Several Civil War veterans are buried in the Forest City cemetery. Area Civil War re-enactors will be a part of the historic ceremony.

The Forest City Cemetery board will serve refreshments. Anyone interested is welcome to attend. There is no charge. For additional information, contact Mike Girdner at (816) 487-2084.
Posted by Deb Goodrich at 4:31 PM