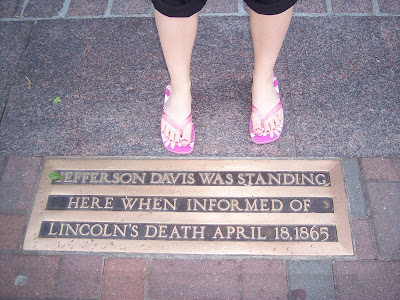 I just returned from Charlotte, North Carolina, yesterday. It was a gorgeous time--azaleas in bloom, lawns bright green, poplar blossoms dropping in your path. As ever, I was searching for history. 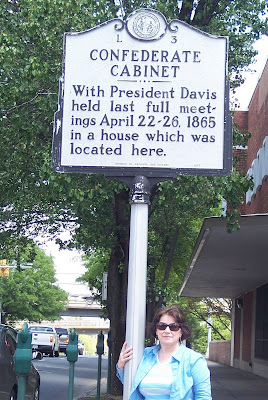 As I said in my previous blog, April should be Civil War Month. While in the Queen City, I searched for evidence of Jefferson and Varina Davis. Varina sought refuge in Charlotte after fleeing Richmond, actually set up housekeeping for about a week before she and her children were forced to continue south. Jeff followed her, a scant few days later. It was here that that the Confederate President learned of the assassination of President Lincoln. The marker pictured above is on the corner of 4th and Tryon Streets, smack in the middle of downtown.
Varina wrote of hearing of Lincoln's death, as she and her husband were travelling separately:
A courier arrived with the news that General Johnston's army were engaged in the preliminary arrangements for surrender. He also informed me of Mr. Davis's arrival in Charlotte, and of the announcement made to him there of the assassination of Mr. Lincoln. I burst into tears, the first I had shed, which flowed from the mingling of sorrow for the family of Mr. Lincoln, and a thorough realization of the inevitable results to the Confederates, now that they were at the mercy of the Federals.
Davis himself had said it was the worst blow that could befall the Confederacy, coming at this time. Both the Davises were well aware that Yankees would be inflamed by the news.
A few blocks away, I found the sign on the above right, marking the last full meeting of the Confederate cabinet. Sadly, the house Varina rented has been razed and the coliseum occupies the spot. 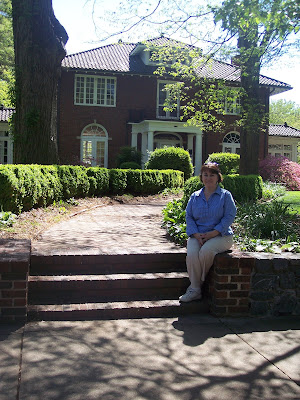 To my great delight, however, the home where Western film star Randolph Scott is still standing (left), and is being remodeled for "a young family." I went inside and visited with the guys who were refinishing the floors. It is a beautiful neighborhood, not far from where my daughter now lives. I hope to return and it is my fervent hope that the young family that will make this their home appreciates the movie star who lived here so many years before them.
It was a thoroughly satisfying trip.

Restoration begins next week on Beauvoir (below), the Biloxi home of Jefferson Davis that was nearly destroyed by Hurricane Katrina. Officials hope to have the residence repaired in time for the 200th anniversary of Davis's birth on June 3, 2008. 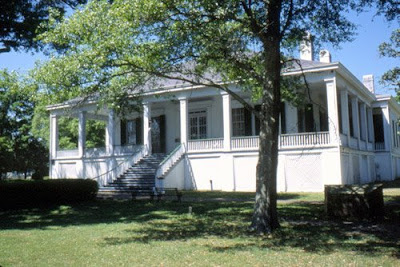 "The skill and knowledge that goes into restoration work of historic buildings is unbelievable, as we've learned in interviewing craftsmen and specialists," Richard Forte Sr. told the Associated Press. Forte, of Hattiesburg, is Beauvoir's acting director and chairman of Beauvoir's boards of trustees and directors.

The Lathan Company of Mobile is the contractor for the restoration, which is expected to cost $3.9 million. Beauvoir received flood insurance but is in litigation with its wind policy. Beauvoir will be rebuilt first, followed by repairs to the adjacent library.

Forte said Gov. Haley Barbour and other local and state officials are expected to be on hand on May 3 when the restoration is launched.

Beauvoir was hit by a nine-foot wall of water when Katrina roared ashore. The home, built in 1852, had survived 21 hurricanes before Katrina, but the Aug. 29, 2005, storm nearly destroyed the popular beachfront tourist attraction. Katrina shredded Beauvoir's roof, front porch, chimneys and pillars and flooded the elevated interior with about a foot of water. The hurricane also damaged a library, museum and other structures on the 52-acre property and swept away about one third of Beauvoir's artifacts, including some of Davis' manuscripts and roughly $250,000 worth of Confederate currency.