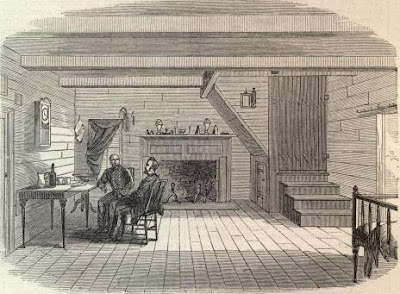 April should be Civil War Month. No more momentous events of the War occurred than in "the cruelest month." In 1861, of course, was the fatal firing on Fort Sumter. On this day in 1861, Colonel Robert E Lee turned down the offer to command Union armies. After the War had started, there is no end to the number of battles and skirmishes that transpired in April. In the spring, a young man's mind turns to waging war. . . . Then came April of 1865--the siege of Petersburg, the flight from Richmond, the surrender, the raising of the U. S. flag over Sumter, the assassination--events unfolded too quickly for people to comprehend. On this day in 1865, Confederate General Joe Johnston met with Union General William Tecumseh Sherman in North Carolina to discuss terms of surrender. They would sign the official document a few days later.

I write this from North Carolina, from the mountains about a half-mile through the woods to the Virginia stateline. I was in Hillsville, Virginia, yesterday, visiting my brother and sister-in-law who have a produce market. News from Virginia Tech permeated every conversation, every thought. Everyone here has someone at Tech. Football coach Frank Beamer hails from Fancy Gap, and a high school friend of Beamer's stopped by the market to visit and talked of speaking to Frank on the phone the night before. In a place where everyone knows everyone and most of us are kin, these stories hit especially hard.

April can, indeed, be a cruel month. Later in the day yesterday, we visited the University of North Carolina at Greensboro. While my sister took an exam, I walked around campus with my girls. Flags were at half-mast and everywhere we overheard the conversations of reaction to the news at Virginia Tech. UNCG is a beautiful place. Honeysuckle was in bloom and azaleas were just starting. A few dogwoods in shaded spots were in full glory. In a few weeks, the waxy magnolias will fill the entire campus with perfume.

While driving home and listening to the sad, sad news on the radio, one of our aunts called to say our cousin had just been wheeled into surgery for a long-awaited kidney transplant. I was overcome by the emotion of the past days.

April is the month where Nature reclaims all. The rain, the wind, the cold, the warmth--April shakes and stirs the earth and the soul. From cold and tragedy, April wrests hope. 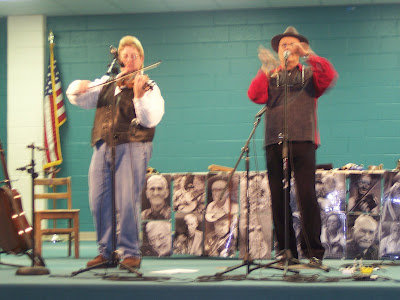 David Holt (right)performed here this week and my old friend Jimmy Vipperman (left) accompanied him. After the performance, David and I were visiting and somehow the subject of the Civil War in the West came up and we began discussing Jesse James. Is there no end to the fascination folks have for Jesse?? No, I tell you, there is not! I will write more on David and his own links to Civil War history when I'm back on terra firma in Kansas. In the meantime, visit his site at davidholt.com.
Posted by Deb Goodrich at 8:41 AM