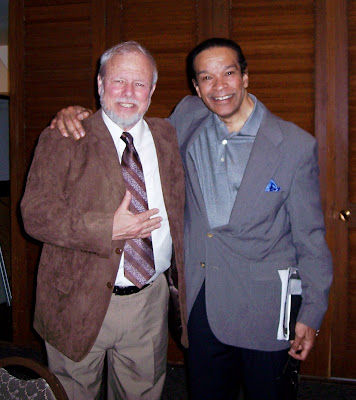 Thomas G. Smith (above, left) was speaking to our Kansas City CWRT on Tuesday night when he got quite a surprise. Professor Jimmy Johnson (above, right) came up and introduced himself and the two men have something very unique in common. Their great-grandfathers served together in the Union Army during the Civil War and were stationed at the same spot in Kansas. Tom hugged him and said, "Hello, cousin!"

Tom and his wife, Elaine, were visiting from California and he addressed our CWRT here in Topeka on Wednesday night, and somehow in between, he sneaked in a booksigning at our local Barnes and Noble. A little background:

While working on the visual effects for the movie Gods and Generals, Tom became fascinated with his own Civil War history. Many of us have ancestors who served in the war, but Tom's family name was changed because of the war. It was an intriguing story and Tom turned the family history into a novel, Massacre at Baxter Springs. His great-grandfather, William Clark, was killed by William Clarke Quantrill's men at Baxter Springs, Kansas. Clark was a member of the 3rd Wisconsin Cavalry.

Professor Johnson's great-grandfather, born into slavery in Virginia, escaped from a Platte County, Missouri, farm and joined the 1st Kansas Colored, the very first black regiment in the Union Army. He was stationed at Fort Blair, near Baxter Springs.

Also in the crowd that night were Jack Hughes and the Mrs. from St. Joseph, Missouri. Jack, too, had an ancestor in the 3rd Wisconsin and he and Tom have been corresponding for some time. He brought scrapbooks of his great-grandfather's service. 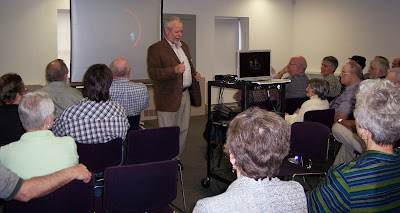 In addition to all this fun, Tuesday night happened to be the 400th regular meeting of our KC roundtable and I was privileged to preside. We have some great programs coming up, have a wonderful dinner venue at Homestead Country Club, and welcome other Civil War fanatics to join us! Likewise, the Civil War Roundtable of Eastern Kansas (above, founded by my Tom over ten years ago) meets at the Kansas Museum of History here in Topeka and is an enthusiastic and knowledgeable group of folks. Email me and I can give you the details on either group. (Our good friend, Dr. John Sellers from the Library of Congress, will be speaking to both groups in April, and our bud, Dr. Anthony Waskie in May.) 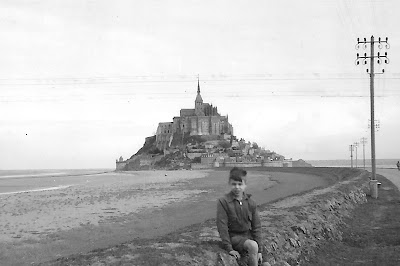 Tom used to run Industrial Light and Magic for George Lucas. The list of films he has worked on reads like the rundown of blockbusters over the past 20 years. From The Empire Strikes Back to Honey, I Shrunk the Kids (which he also produced), the resume is quite impressive. But Tom's Midwestern roots are evident. He is affable, compassionate, down-to-earth, and committed to good work. "I never made a movie I couldn't show my mother," he commented. In light of today's films, I'd say that is quite the accomplishment.

Tom's dad, who worked for International Harvester, was sent to Europe following World War II and as a young man Tom witnessed the devastation of that continent. He recalls German children doing handstands for food and remembers the debris on Omaha Beach. (Above, Tom as a child at Le Mont-Saint-Michel in northwestern France.) The experience has shaped his views and though retired from film, he is writing a memoir about that time. We can't wait to read it! 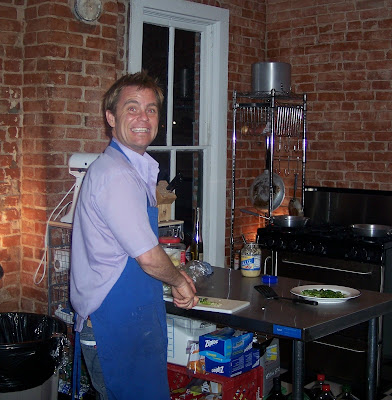 Greg Fox (left, far too happy to be working!) has always wanted his own restaurant (he is a partner in the Celtic Fox Pub) and has made his dream come true with the Row House Restaurant (rowhouserestaurant.net). After Tom's presentation Wednesday night, Dan and Carol Turner hosted us there for some of the best food we've ever had! The building was constructed in 1876 and is a block from the Kansas statehouse. Not yet open to the public, Greg is hosting private dinners so check it out! We'll leave you with some photos from that night. From top to bottom: Tom Smith, wine and bread; Dick Nelson from Barnes and Noble, Cheryl Logan from the Mulvane Art Museum, and our very cute waiter; Dan and Carol Turner. Bon Appetit! 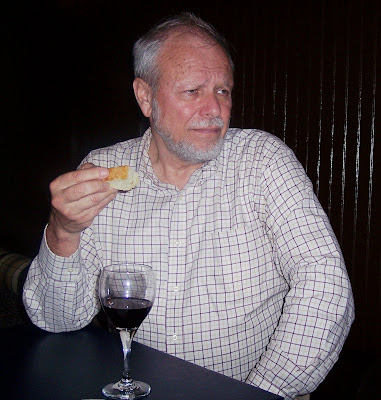 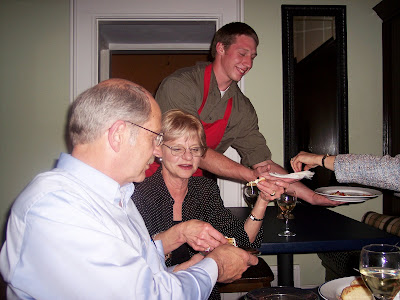 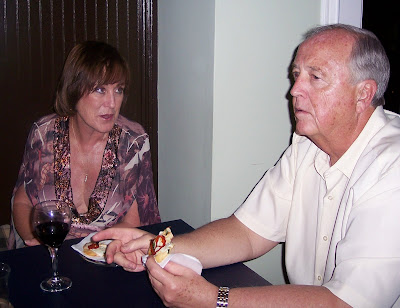