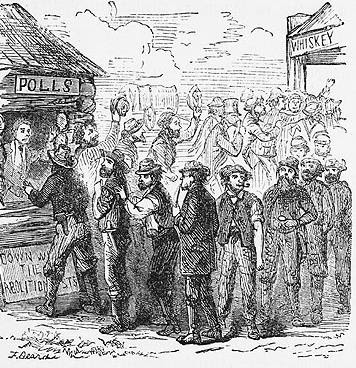 Tuesday was primary day here as I'm sure it was in many towns and cities across the country. The results have been pretty interesting.

During the era known as Bleeding Kansas, thousands of Missourians flocked across the border to vote in the territorial elections, trying to sway the results in favor of the Southern cause. As a result, New Englanders packed up and headed for the territory themselves, hoping to swing ballots in the opposite direction. In one of those first elections, there were about 6,000 votes cast and only 3,000 eligible voters in the Kansas Territory.

My, how times have changed!

Ogden, a small town near Fort Riley, had five votes cast in the mayor's race on Tuesday. The incumbent won 3-2. We were wondering, did his wife vote for or against him? My Daddy was a county supervisor in Patrick County, Virginia, during the 1970s. He was also a preacher, Primitive Baptist, and Mama considered politics too worldly a pursuit for preachers. She refused to vote for him.

Apparently, Missourians just aren't as thrilled about suffrage as they used to be either. Among my emails this morning was one from our friend Jay Jackson, one of the 300 residents of Missouri City, Missouri, located a dozen miles downriver from Kansas City. According to Jay's email, Joe Selle was running for alderman in Missouri City's Ward 3. Maybe being alderman was low on Joe's list of priorities (he's a musician, after all), but what was he thinking when he drove past the school, used as a polling place, and saw people gathering there? Selle said it never occurred to him they were VOTING. No, he kept right on driving.

In fact, NO ONE in Ward 3 voted. Selle, running unopposed, got nary a ballot cast for him. Is that a mandate?

This isn't the first interesting election result the small town has faced. In 2001, when a woman was elected mayor, there was a legal challenge because the city's 1859 charter stated the mayor had to be a "free white male." The city council got together and decided The Civil Rights Act made that clause void and allowed a female to keep the job. 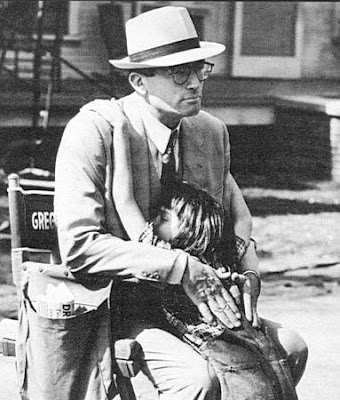 Today is the birthday of Gregory Peck, who was born in 1916 in California (though his mother was a Missourian!). We're claiming him as a Southerner for no character personified the Southern ideal as well as Atticus Finch in To Kill A Mockingbird. No, the movie isn't as good as the book, but is a masterpiece in its own right owing to the Academy-Award-winning performance of Peck. He is pictured on the set with Mary Badham who played his daughter, Scout.
Posted by Deb Goodrich at 5:32 PM