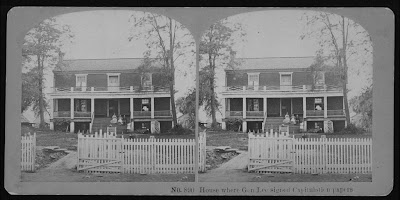 On this day in 1865, Gen. Robert E. Lee was no longer willing to sacrifice his men in what was now a futile struggle. He surrendered the Army of Northern Virginia to Lt. Gen. U. S. Grant in the parlor of the McLean House (above).

Not long after Tom and I met, we were passing through Lynchburg, Virginia, and he wanted to stop at Appomattox, at the National Historic Site that commemorates the close of the war.

"I'll bet you've been here dozens of times," he said, thinking that since I had lived so close it was an easy trip.

"I've never been here," I replied. "My Daddy wouldn't stop." 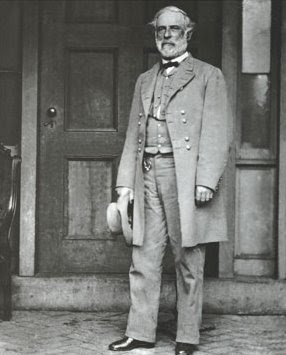 It would be interesting to compare the number of Northern vs. Southern visitors to this site. I would wager the Yankees outnumber the Rebels by lots. As an historian, I appreciate the value this place has in history; as a Southerner, it's like visiting your Grandfather's grave.
The days at Appomattox have been written about to the point of exhaustion, but a few things bear repeating: The fact that Lee found slavery abhorrent, that he could not take up arms against his fellow Virginians, that he hoped he would never be called upon to draw his sword. Following the surrender, there were many Yankees who came over to visit Lee, to meet the man many considered to be the greatest general on either side. He was cordial, but not friendly. We forget, in our reverence for Lee, that he was a warrior. He did not like to lose. (The photo at right was taken at his home in Richmond after the war ended.)

The enlisted men visited one another, traded food, talked back and forth and Southern soldiers became possessive when their Northern counterparts talked about "Bobby Lee," in too familiar a fashion.
"He's ours!" more than one Rebel shouted. At this moment, just like the beginning of the war, Northerners had wanted to claim him, too. But by this time, Lee was all there was left to many soldiers, to many Southerners. Is is so strange we would cling to him so tenaciously to this day?
___________________
Wanted: Van Buren

Sangamon County, Illinois, can always find an Abraham Lincoln impersonator. But what the area needs is somebody who looks like Martin Van Buren. The 8th president was about 5 feet 6 inches tall, trim with a ruddy face. If you fit the part, the Lincoln-Van Buren Historical Association of Rochester, Illinois, wants to hear from you. The not-for-profit group is planning activities for June 15-16 to commemorate the 165th anniversary of a meeting between Van Buren and the then-33-year-old Lincoln in Rochester in June 1842.

Van Buren was 59 at the time. He had served a term as president from 1837 to 1841, lost a re-election bid in 1840 and was contemplating another try at the office. R.L. and Carolyn Moore of Rochester, who are among commemoration organizers, said they would like to include Van Buren and Lincoln impersonators in the festivities. Lincoln's jokes and story-telling are said to have captivated Van Buren, who died in 1862, two years after Lincoln was elected president.

"He is said to have laughed so hard his sides hurt," R.L. said.

Another reference says Van Buren later described the evening in Rochester as one of the most enjoyable of his life.

Springfield artist Helen Stannard has been commissioned to create a historically accurate mural, 18 feet by 24 feet, depicting Van Buren and Lincoln enjoying a conversation. The mural is to be mounted permanently on a former grain bin known as "the Silo" near the intersection of Illinois 29 and Jon Street in Rochester.

Details for the commemoration still are being worked out, but the Moores said events will include an unveiling of the mural; quilt, flower and antique shows; and visits with area residents whose genealogy includes U.S. presidents or relatives of U.S. presidents.

Proceeds from a $50-per-plate dinner featuring foods that were among Van Buren and Lincoln's favorites will benefit a scholarship fund and help pay for the mural.

Newton, Kansas, is a quiet, prosperous little town not terribly far from Wichita. Driving down its tree-lined streets today, one would never guess its wild and wicked past. Famous visitors or inhabitants included The Earps and William F. Cody. From a recent article in The Kansan: 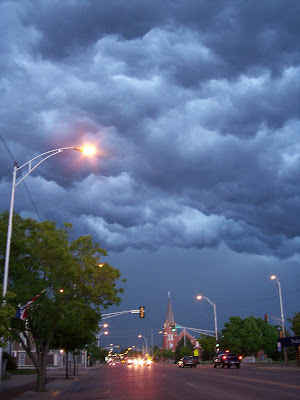 Buffalo Bill’s first comments were about the early days, when Newton was the end point of the railroad.

Here is what Buffalo Bill said: “The toughest, cussedest, wild west town I ever knew was Newton, Kansas, in the early seventies. People talk about Dodge City and Macon Junction as tough towns, but Newton could give them cards and spades on wholesale depravity and recklessness.”

The original Newtonians were all out “to rob the cowboys and cattlemen.”

There were better moments, of course. Buffalo Bill heard about a religious service in a gambling hall. One Sunday night, a Methodist preacher went to Doc Thayer, the boss of the gambling den, and requested permission to preach amongst the card tables and whiskey bottles. He wanted to spread the Gospel. Permission was granted, but while the pastor was preaching, a fight broke out and someone was shot.

Ah, those were the good ole days! Fortunately, the residents are more tame than the weather these days. A while back, Noel & I were in Newton for the Kansas Sampler Festival, and as we were leaving the skies turned ominous, dark and green, and it began to hail. We took refuge in an Applebees and waited for the tornado to hit. Fortunately, it never did, but as you can see, it was pretty scary.

Newton has always been an exciting place.
Posted by Deb Goodrich at 12:12 PM