This is the Star Spangled Banner which flew over America when Abraham Lincoln was born in 1809. While plans are being made for the nationwide celebration of the bicentennial of Lincoln's birth, let us take a minute to talk about flags.

Every student of American history knows that Francis Scott Key penned the words to our national anthem while a prisoner on a British ship off the coast of Baltimore. Whether you can sing it or not, it makes the heart soar to hear his heartfelt words of joy and gratitude as he beheld the symbol of his beloved young country. What you may not know is that just decades afterward, his grandson was a prisoner at Fort McHenry, the very place Key saw the banner of freedom that stirred him so.

Following the assassination of President Lincoln, untold numbers of American citizens were arrested for "disloyal utterances." Most of these offenses were mere comments critical of the Lincoln administration. Among those jailed was Frank Key Howard, Key's grandson. Howard understood perfectly the cruel irony of his situation:

"As I stood upon the very scene of that conflict," the prisoner wrote, "I could but not contrast my position with his, forty-seven years before. The flag which he had then so proudly hailed, I saw waving, at the same place, over the victims of as vulgar and brutal a despotism as modern times have witnessed."

In 1861, when the Confederate States of America had held its first meeting in Montgomery, Alabama, in order to set up a government, discussions turned to the flag. Jefferson Davis saw no need to change.

"Mr. Davis was very averse to relinquishing the old flag," wrote Varina Davis, "and insisted that a different battle-flag would make the distinction enough between the combatants; but he was overruled. . . ."

Jefferson Davis had defended the U. S. flag in the Mexican War. During the American Revolution, his father had fought to ensure that it flew forever. Now a war would be fought to decide what the flag meant.

(Flag above right, the 1st National Confederate Flag, the "Stars and Bars.") In response to yesterday's blog on the Confederate flag, I received some interesting comments. Among the most well-informed words are those from LTC (ret.) Ed Kennedy (left) of Fort Leavenworth, Kansas. A word of advice: NEVER argue with Ed!

In 1900, 1906, 1929 and 1958 the U.S. Congress passed successive acts that recognized Confederate soldiers as American servicemen. This was in response to many Northerners that wanted to heal the wounds of the war and reconcile. 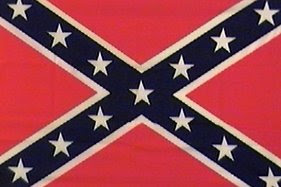 The effects of these acts granted Confederate veterans similar rights to those of U.S. veterans of the war including burial in National Cemeteries with Federally supplied headstones and pensions. The captured flags were ordered returned to their respective states as honored banners of brave foes. The Confederate Battle Flag is an American flag. Its misuse by bigots as well as anti-Southerners is despicable. Courageous and brave soldiers fought under the flag just as those who fought under our U.S. flag. It is a military symbol. 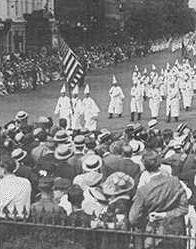 The KKK has no more right to the flag than the Iranians who both burn and define the U.S. flag as one of a "terrorist" country. The descendants of the Union Army soldiers recognize the Battle Flag as a military symbol representing a worthy foe. In a 2000 Sons of Union Veterans resolution they state: "WHEREAS, we, as the descendants of Union soldiers and sailors who as members of the Grand Army of the Republic …, pledge our support and admiration for those gallant soldiers and of their respective flags...." Plainly stated, both the U.S. soldiers and descendants respect the Battle Flag and repudiate its, and the U.S. flag’s, misuse. The bottom line is that the misuse of the Battle Flag does not define it anymore than the U.S. flag, which is carried by their own rules, is defined by the KKK.

Kentucky--The town square in the central Kentucky town where the 16th president first saw the light of day is being transformed to accommodate as many as a million visitors next year when the Abraham Lincoln bicentennial birthday celebration begins. A roundabout is being built downtown to ease traffic woes and Early American-style street lamps are being added, the News-Enterprise newspaper reported. Lincoln was born in a one-room log cabin near what is now Hodgenville. The modest "birthplace" cabin is now surrounded by a memorial befitting a king. Like the birthplace of Wyatt Earp (see Tom's blog today),

this cabin is almost certainly not the one Lincoln was born in, though there may be a couple of original logs, and the remainder may come from the same time. (Is this a great country, or what?!!) Illinois--Following a $12.5 million renovation and nearly two years of work, Union Station in downtown Springfield is scheduled to reopen to the public today as part of the Abraham Lincoln Presidential Library and Museum complex. The building has been restored to its original appearance when it opened in 1898 as the Illinois Central Railroad depot. The first floor of Union Station will now serve as a visitor center where tourists can buy tickets to the Lincoln museum, receive information on other state tourism sites, book hotel reservations, and take advantage of free wireless Internet access, officials said. "In just two years, and over one million visitors later, the museum continues to be a top destination for folks across the country and around the world," Rick Beard, executive director of the Abraham Lincoln Presidential Library and Museum, said. (Plus, they have a great gift shop, though the best book selection remains the gift shop at the National Park site nearby.)
________________________________________

Yet, Freedom! yet thy banner, torn, but flying,
Streams like the thunder-storm against the wind. -- Lord Byron
Posted by Deb Goodrich at 2:41 PM