Eight years ago this June, (seems like 20, doesn't it honey?), Tom and I were wading in the Shenandoah River at Harpers Ferry. It was after hours, so most of the offices and shops were closed, but it was still daylight and we walked out into the sacred waters. We were nauseatingly in love then, and I couldn't think of a more perfect place to be.

We were living in our camping trailer and writing The Day Dixie Died. We had camped at the KOA in Harpers Ferry, which is like living in a migrant camp. KOAs are great for some needs; privacy and space are not among them. But you usually get your own sewer hookup, which you really come to appreciate, and they are generally located near the places you want to see, i.e. Harpers Ferry.

Harpers Ferry is my favorite spot in America. I have always hoped to live there, if just for a year or so. I was a kid the first time we visited Harpers Ferry, (though I had plenty of ancestors there with Stonewall Jackson several years earlier). It was shrouded in mist and I was spellbound. John Brown loomed in the shadows, and the thunder could easily have been cannon. 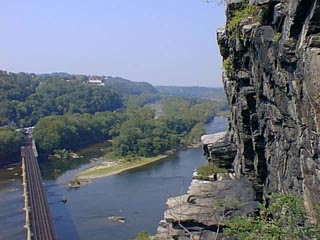 Tom and I go to HF as often as possible. Just a few months ago, we stopped in and spent the night with our friends Tish and Peter Appignani. (We try to locate folks strategically around the country!) A couple of years ago, we happened by while Gods and Generals was being filmed. The town had been turned into the set for Fredericksburg and soldiers were mustering next to the canal. I spied our buddy, former Harpers Ferry National Park historian, Dennis Frye; but, since Dennis was orchestrating troop movements for the film, Tom didn't want to bother him. I went over and said hello, and immediately Dennis asked, "Where's Tom?" and went with me to find him. So many good, good memories.

Now Harpers Ferry has a rather ignominious designation. It's on the top ten of our most endangered battlefields, according to the Civil War Battlefield Preservation Trust. I'm not the only one that wants to live there, and the demand for housing is threatening to choke so many sacred places.

Of course, it's just a given that Chancellorsville, Gettysburg, Fredericksburg--anything within the epi-center of the Civil War--is threatened. I know it is always a balancing act; we can't save everything. But at some point in America, we have got to come to our senses when it comes to sprawl. Giving up the ground where our ancestors struggled and died just for Starter Castles and McMansions, Pizza Huts and WalMarts, and other symbols of "progress" is blasphemous.
Posted by Deb Goodrich at 4:54 PM