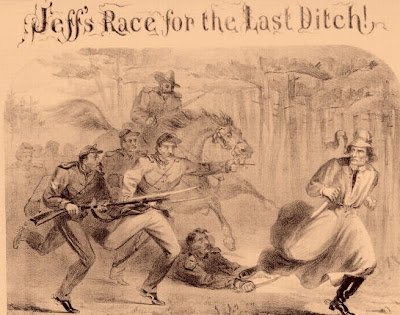 There is NOTHING new under the sun.

According to various news reports, a senior Taliban commander was captured by Afghan troops near Kandahar. The man, Mullah Mahmood, was wearing a burqa, which is a tentlike, all-covering garment still worn by many women in the countryside. As with every single headline that comes across the screen, this reminded me of an incident from the Civil War.

He is Caught in His Wife's Clothes!!!

Thus ran the headlines when Confederate President Jefferson Davis was captured May 10, 1865, near Irwinville, Georgia. Fleeing the falling Confederacy with his wife and a handful of escorts, Davis was awakened by the sounds of skirmishing on that fateful morning. When Varina figured out what was happening, she threw a shawl over her husband in hopes he wouldn't be recognized. He was not wearing a dress, though the Northern press had a field day reporting that "fact" and dozens of images of Jeff in disguise were printed. A few righteous souls, however, like this gentleman from Maine, spoke up: 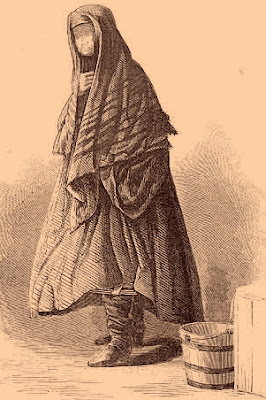 I was with the party that captured Jeff. Davis; saw the whole transaction from the beginning. I now say . . . that Jeff. Davis did not have on at the time he was taken any such garment as is worn by women. . . . I defy any person to find a single officer or soldier who was present at the capture of Jefferson Davis who will say, upon honor, that he was disguised in women's clothes. . . I go for trying him for his crimes, and if he is found guilty, punishing him. But I would not lie about him. . . .

Good man that he was, no one was listening. They heard and believed what suited them best. Sometimes I wish I could watch the news and not be skeptical, and even though I really trust most reporters (afterall, I was one once), I don't always trust their sources. There is always too much politics involved, just as the sketch shows (above, right). This is the official War Department sketch of the clothing Jeff was supposedly wearing when captured. The actual garments had been placed in a safe. Secretary of War Edwin Stanton, now effectively running the country since Lincoln's death, ordered these clothes placed on a mannequin and that is the image released to the press. The caption reads: "The clothes in which Davis disguised himself (from a photograph taken at the War Department by Alexander Gardner)."

From Scott Porter this morning. . . .

While at Barnes and Noble last night I picked a magazine named "Missouri Life." Inside of the Feb 2007 edition is a great article on the Confederate Home at Higginsville. Get this, the name of the article is..."HOME OF THE BRAVE." Its a GREAT article with lots of great pics of the old vets and buildings. At the end of the article it states "One of the best times to visit is during their annual memorial weekend, which is scheduled on a Saturday near the June 3 birthday of Confederate President Jefferson Davis. The date for the 2007 memorial service is June 2.

Graves are decorated with flags, and reenactors take on the roles of past Confederates, helping vistors to learn about life and issues of past times." Also inside the same edition a piece and picture on the Bushwhacker Museum (Nevada, Missouri).

DG-Thanks for passing along the tip. Scott is an instructor at the Command and General Staff College at Fort Leavenworth, Kansas, and a first-rate Civil War historian. If you've never visited the Confederate Cemetery (left), it is well worth your time to get off the interstate and make the short drive. Among the notables bured there is William Clarke Quantrill, Confederate guerrilla chieftan. Likewise, the Bushwhacker Museum is a great trip if you're in the neighborhood. Tell our good friend, Pat Brophy, we said "hello."

"I hate this old fast time!" Granny complained about few things, but when it came to setting the clocks ahead, she let it be known where she stood.

She despised it. I inherited this trait, and few things tick me off like losing an hour in the spring. I nearly go "postal." Yesterday, everytime I looked at the clock, it seems it had in fact leaped forward, a half hour, 45 minutes, when I'm sure it had only been five minutes since I last checked! I hate this "fast time" and live to get that hour back in the fall. I only fear, that in my lifetime, they will take that hour and never give it back. When I was a kid, the deacon of the church would not observe Daylight Savings Time, since God observed Eastern Standard Time. So during the summer, he had the church keys and folks would show up an hour early, wait for him to open the door, some on time, some an hour late--never quite figuring out what time God was on. I'm with the deacon.

Like their annoying modern counterparts, the first generation of paparazzi staked out the homes of Buffalo Bill, Wyatt Earp, Lillie Langtry, and other Old West personalities. In the image above, we see an eager swarm of these pests waiting outside the North Dakota home of George and Libbie Custer.

Grant writes in his book: "Personal Memoirs of General U. S. Grant," that Jefferson Davis was captured wearing a "gentleman’s evening dress".

Hmmm, not exactly sure what constitutes a "gentleman's evening dress," but the keyword here would be, gentleman, I believe. Jack Davis once commented it was a little strapless number. . . :)