The Most Outrageous Spectacle 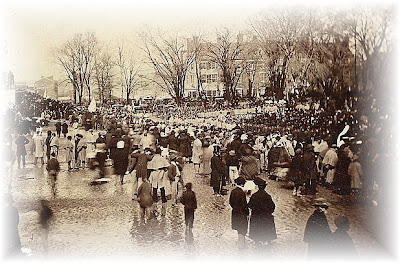 Is anyone out there old enough to remember when Nelson Rockefeller was loaded at the Republican National Convention and, after gleefully pulling the delegation's phone from its jack, was tactfully escorted off the floor and administered gallons of coffee? Well, as entertaining as that was, it doesn't compare to the events of Lincoln's second inaugural (thousands poured into town despite the rain and mud, above). The weekend of March 4-6, 1865, is hands down the Most Outrageous Spectacle in the Annals of American Politics. And the star of the show was Vice-president Andrew Johnson.

If you're a student of history, you have read that lofty, inspiring, speech, "the better angels" speech, that Lincoln delivered on the portico of the Capitol. You also know that after torrential rains, the sun came out and shone down its blessing on America's beleaguered leader. What you may not know is that Lincoln's ringing speech is virtually the only lofty, inspiring, moment in a comedy of errors unequalled in our history.

Andrew Johnson came from circumstances even lower than Lincoln's. No one's ascension to the White House was more miraculous than his, and he knew it. He was in Tennessee and gravely ill in the days just prior to the inaugural; he wrote Lincoln and begged to be excused from the whole affair but Lincoln wouldn't have it. So the feverish Johnson made the arduous trip to Washington, and just before he delivered his inaugural speech, he took a couple of BIG swigs of brandy to fortify his soul. He should have shared with the spectators. In fact, nothing short of pulling a flask from his waistcoat and offering a drink to the president could have been more shocking. The heat of the chamber, the stress of the moment, the weakened condition of our subject--all combined to the get the best, or worst, of Johnson.

"I'm a'here for to tell you," ranted the man who was a heartbeat away from the presidency. "I'm a'here for to tell you, I'm a plebeian, your president, he's a plebeian." Johnson pointed to the various personages, the most important men in the country, and vowed that each and every one was a plebeian, a servant of the people. Except for Secretary of the Navy Gideon Welles. He couldn't remember his name. Finally, someone gave him the answer and he declared that yes, Welles, too, was a plebeian.

Even those in the audience who knew what a plebeian was were certain that it comforted no one to be lumped into the same category as the drunken Johnson (left). Democrats leaned forward in delight; Republicans slumped in their chairs and avoided the gaze of their gloating adversaries. President Lincoln slipped quietly into the room in the midst of Johnson's harangue and sat with his head in his hands, staring down into his lap. He made eye contact with no one. When asked to swear in the new senators, Johnson merely mumbled and waved the Bible over them. They looked quizzically to one another? Were they official? Should they sit down?

Efforts to stop Johnson were futile; tugs at his coat went unnoticed. At last, he was forced to his seat. Despite the pause in the deluge and the throng's ability to move outside for the remainder of the ceremonies, despite Lincoln's appropriate and comforting words, despite the miracle of the sun's breaking forth at just the right moment, despite the bright prospects for the country in March of 1865, the spectre of Johnson's stump speech lingered over all. It had embarrassed the president, outraged the first lady (so much so that she would always believe Johnson responsible for her husband's death), and left Johnson an outcast despite his position. It would be a cloud over his own inaugural, and on his presidency.

(For more on Lincoln, look for the March issue of Armchair General . You'll find an article Tom wrote on the aftermath of the Lincoln assassination. Also, be sure to read Editor Jerry Morelock's editorial on the same subject. )

With all the news of weather and where to bury Anna Nicole, you may have missed the important news from Arkansas this week. 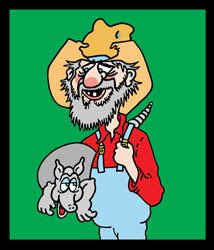 The legislature voted on the official spelling of the possessive of the state's name. Henceforth, the possessive of Arkansas is Arkansas's. It is a sad commentary when the state of education is so lacking in this country that legislative bodies must tell us where to put an apostrophe! (But, at least they are stepping up to the plate and taking a stand on punctuation!) No word yet on what to call someone from Arkansas. Is it an Arkansan? An Arkansawer? In other news from the Natural State, convicted drunk drivers are going to get hot pink license plates. Boy, is that going to hurt Bubba's feelings! 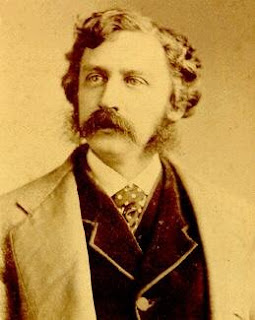 Thought for the Day

Give me a man that is capable of a devotion to anything, rather than a cold, calculating average of all the virtues--Bret Harte
Posted by Deb Goodrich at 1:11 PM