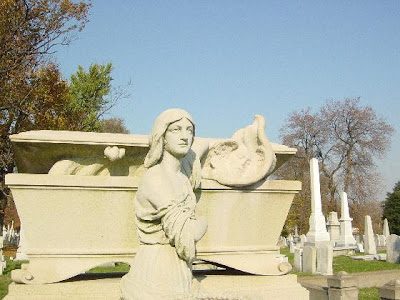 Oh, to be in Philadelphia for the cemetery tour!

The first time I was at Laurel Hill Cemetery, beautifully situated on a hillside overlooking the Schuylkill River, Andy Waskie was leading a group of little old ladies through the historic graveyard. They tittered and talked amongst themselves about how wonderful Andy was and we all ran to catch up as he hurried to the next stop. The second time I was there was for Andy and Carol's wedding in the cemetery gatehouse. But oh, I'd love to be there on April 14 for the Titanic Tour!
Apparently, 45 passengers on that ill-fated voyage were destined for Philadelphia. Twelve of those are entombed or memorialized at Laurel Hill and West Laurel Hill. For $75 you can have dinner and a lecture and get a tour of their graves, or you can just have the tour for $25. Visit their website at theundergroundmuseum.org for more details. 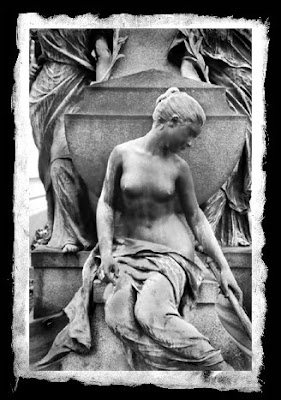 Laurel Hill is a National Historic Landmark and is the second rural garden cemetery in the country (the first is Mount Auburn in Boston which was patterned after Pere Lachaise in Paris (right). Founded in 1836, it is the resting place of many notables not only in Pennsylvania history, but American history. Foremost is Gen. George Meade, Union commander at Gettysburg. Ironically, buried not far from him is Gen. John Pemberton, a Philadelphian who fought for the South and defended Vicksburg against Grant's siege, losing the same day Meade won.

Being a necro nut myself, the first thing I did upon moving to Topeka was write a book about its cemetery. I was struck by the history, the "stories in stone," and didn't think most people were aware of what a visual and historic treasure it is. A couple of years ago, thanks to our friends, the Roussels in France, we visited the "city of the dead," Pere Lachaise, where we found, after four hours, the grave of Confederate Secretary of State, Judah P. Benjamin.
Even if you can't get to Philly for the Titanic tour, stop by Laurel Hill some other time. Or stop by Topeka Cemetery, or Mount Auburn if you're in Boston. One of the most beautiful graveyards we've seen is Cave Hill in Louisville, Kentucky, the final resting place of George Rogers Clark, among others. Then there's the cemetery in Lexington, Kentucky, where Henry Clay, the Todd family, Basil Duke, John Hunt Morgan, and too many other Civil War figures to list rest peacefully beside one another (though in life they may have been enemies). Now that spring is upon us, just visit a cemetery. Help clean up a cemetery. Write a book about a cemetery. Believe me, once you visit you won't want to leave. Just ask the residents!
_______________________
While We're in Philly. . . 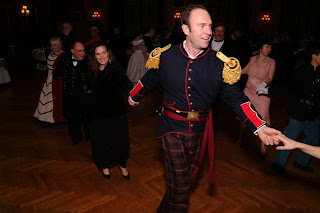 Just received this photo of Charlie Zahm (left) at the recent Lincoln Ball held at Philadelphia's Union League. What a grand location for a party. Also attending was Brigadier Gen. David McMurtry Gregg, (below) aka Carl Popadick. Those folks are always having a fun! Of course, with Charlie's wonderful music, what's not to enjoy? This is the ideal time for you to check out his website and get the perfect background music for Saint Patrick's Day. 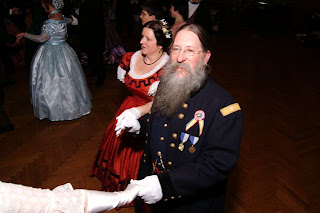 My personal favorite is "Mingulay," about a small fishing village. It's like hearing a hymn. One of Charlie's reviewers said, “Charlie Zahm is a big man with a powerful and expressive singing voice. Listening to him sing Scottish and Irish music is like a deep draught of a thick, heady stout, rich in taste and body. His latest recording, 'Among the Heather,' is more like a luxurious dram of Irish cream--smooth and sweet, yet intoxicating all the same." I'll have a stout to that! http://www.charliezahm.com/.

And while we're on the subject of Irish music, Connie Dover. Never did a Gaelic ballad have a better friend than Connie's ethereal voice. But Connie has a love for the West, too, and is doing more and more cowboy music. My favorite, "Where shall I go?" from her Wishing Well album. It is moving and wrenching, and if it doesn't get to you, you have granite for a heart. http://www.conniedover.com/. 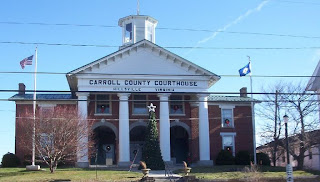 Our friend Tom Perry is speaking Monday night at the Carroll County Courthouse in Hillsville, Virginia. The program starts at 7 p.m., and the subject is "J. E. B. Stuart’s Long Ride To Yellow Tavern." Tom is the founder of the Jeb Stuart Birthplace Trust and I hope if you find yourself in southwestern Virginia you'll attend his talk or go by the birthplace in Ararat.

While we're talking about the Hillsville Courthouse.... There was a little incident there in March of 1912 that still starts arguments all over the county. One Floyd Allen, a distinguished citizen, was on trial for a misdemeanor charge for which he was found guilty and for which he was about to be sentenced to prison.

(Many people believe this was politically motivated, and I'm inclined to agree). Anyhow, when Floyd stood to be sentenced, the shooting started and when it was over, the judge, the commonwealth's attorney, the sheriff, a juror, and a witness were dead. Floyd was injured. The melee was on the front page of Eastern newspapers from New York to Atlanta until a month later when the Titanic sank and grabbed the headlines.

For more on Tom's appearance, check out the freestateofpatrick.com.

And now you know...the rest of the story!