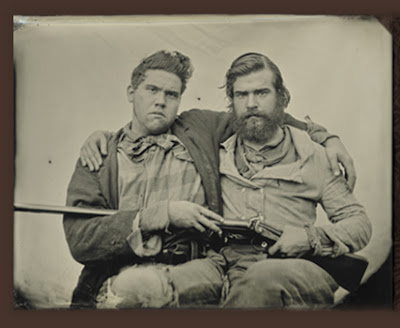 The social event of the Kansas/Missouri Civil War season was held last night and I was served the first glass of wine! Bad Blood: The Border War that Triggered the Civil War debuted at the Liberty Memorial in Kansas City to a packed house that included A&E's Bill Kurtis. Knowing the principals involved, I had high expectations and I was not disappointed. 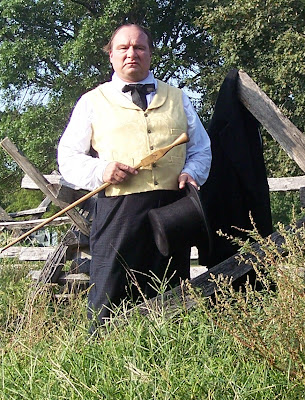 Produced by Pam Reichart and Angee Simmons of KCPT, along with Wide Awake Films, the documentary tells the complex and volatile story of the years before the Civil War, when the nation's animosities were playing out in the West.

Rather than use historians as talking heads, the producers chose to ask the people who lived it to tell the story. Missouri farmers (like the one portrayed by Jay Jackson, right) and Kansas homesteaders describe their experiences offering an original and effective twist to documentary making. (Though, as a frequent talking head I hope this doesn't catch on!) Stealing the show were actors Dave Bearrs as David Rice Atchison and Shane Seley as Jim Lane. The accomplished musician and songstress Connie Dover was in charge of the music, which suited the movie perfectly, and her poignant vocal at the end is worth waiting for. This film is fast-paced, just as events of the era were constantly changing. Bad Blood will air on KCPT March 4 at 7 p.m., and will also be shown on other public television affiliates so watch your listings. 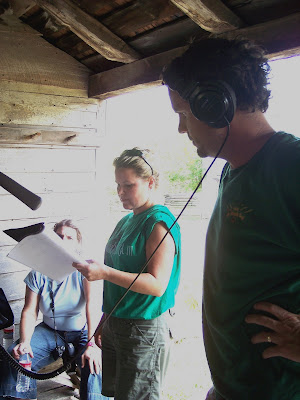 Wide Awake Films will also be offering the DVDs for sale sometime in the future, so ask your local station to air the documentary, and we'll keep you posted when DVDs are available.

Pam says that a tremendous resource while working on Bad Blood was Tom's War to the Knife. Of all Tom's books, it's actually my favorite, and no other volume tells the personal struggles of that era as well. (Just because I'm prejudiced doesn't mean it isn't really good!) In the photo to the left, Angee, Pam, and Shane go over the script on location last summer.
Top photo by Robert Szabo 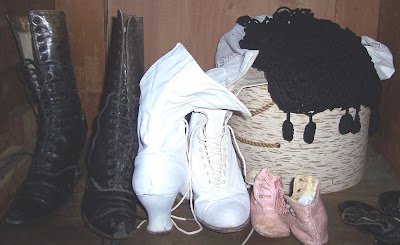 There is nothing more fun than going through someone else's closet! Stopped in to visit with Betty Ergovich at the Harris-Kearney House yesterday. She was showing me some of the discoveries she made when going through the drawers and cupboards of the house for items to display. 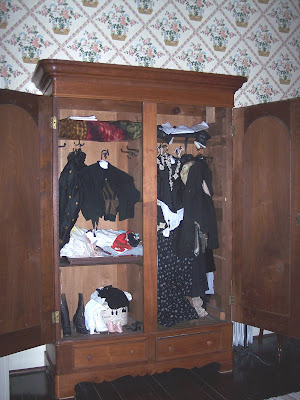 The historic home is the cornerstone of Westport, the village that was literally the "port to the West" and was gradually swallowed up by Kansas City. The charm and energy of that original hamlet remain, however, and Westport is a thriving community with nightspots galore. We'll keep you posted on events at the Harris-Kearney House (including their Veranda Sale June 30--mark you calendar, girls!)Starting in April, we're planning some daylong tours that will include interesting, historic and FUN sites in Westport, so drop a line if you're interested in joining us. We also plan some wine tours, cemetery tours, trail tours--maybe we could do a closet tour. . . .

Our local NPR station had a history trivia question this morning, but I didn't call quickly enough to win, darn it! "This Kansas County was originally named for Sec. of War Jefferson Davis. After the Civil War, the name was changed. Who was it subsequently named for?" 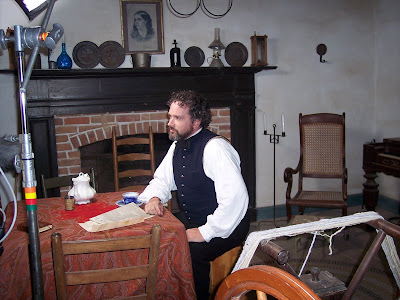 A couple of years ago, I won a free bluegrass CD when I knew the name of the winning presidential ticket in the 1856 election. The answer of course, James Buchanan and John C. Breckinridge. Ironically, Breckenridge, Colorado, is named for this very vice president who was later Secretary of War under Jefferson Davis in the Confederate States of America. Instead of changing the name, the semi-outraged town just changed the spelling from Breckinridge to Breckenridge. Great disguise, guys! Oh, and the Kansas County? The name was changed from Davis to Geary to honor Union general and Kansas Territorial governor, John Geary (above left, as portrayed by an actor in Bad Blood).
____________________
Iron Brigade

Be sure to pick up the March issue of America's Civil War. Featured are photographs and artifcacts from the famed Iron Brigade, as well as an insightful article by Lance J. Herdegen, the brigade's biographer. Truly quality scholarship and compelling images

What would men be without women? Scarce, sir, mighty scarce. -- Mark Twain