Lest y'all accuse me of being anti-Yankee, I would like to take the time to honor a Yankee that you may not know, but that I have come to admire tremendously. Edwin Vose Sumner was 63 when the Civil War started; an old man, a combat veteran, a friend of Jefferson Davis and Robert E. Lee. In many ways, he was their peer--a soldier of the old school, an honorable man doing his duty. His service in the Civil War was inglorious; he was not suited for the assignments given. Gen. George B. McClellan said of him, "in many respects [he is]… a model soldier, but unfortunately nature had limited his capacity to a very narrow extent."

In my humble opinion, the shining moments of Sumner's career came while stationed at Fort Leavenworth in the Kansas Territory. It fell to him to keep the peace between pro-slavers, freestaters, freesoilers, nuts, and fanatics. It was no small task. John White Geary, who would later distinguish himself as a Union officer, served as territorial governor of Kansas. The six-foot-six Pennsylvanian left Kansas for good one night in fear of his life. Geary admitted that he had never encountered such a challenge. But it was a challenge that Sumner met daily. Tom and I both believe that had a lesser man than Sumner--a man with more ego, perhaps, and more to prove--had such a man been the military commander, the Civil War would have begun here in Topeka several years before the firing on Fort Sumter. 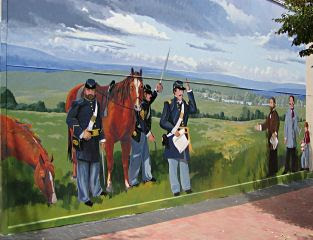 Personally, Sumner was against slavery and against its expansion. The native Bostonian also believed it was not his job to sort it out. He was a soldier.

It fell to Sumner to break up an illegal meeting of the Free-State legislature in Topeka on July 4, 1856. The free-state community of Lawrence had been sacked and burned in May; John Brown and his followers had chopped to pieces five pro-Southern settlers south of Lawrence in retaliation. Tempers were short, temperatures were high (a hundred degrees by noon) and folks were armed and ready for a fight. Sumner rode into Topeka leading his troops and then the cannon matches were lit. He would use every force at his disposal to execute his duty, though it pained him. He meant what he said and people knew it. Legislators bailed out of the windows in their hurry to scurry, and an encounter that had the potential to ignite a nation fizzled out.
A couple of years later, Sumner had the occasion to be in Washington, D. C., where he called on his old friend and former boss Jefferson Davis. (Davis had been Secretary of War while Sumner was in Kansas.) Davis, now U. S. senator from Mississippi, was gravely ill and confined to his bed. The old soldiers would hold hands in the dark while Sumner told him tales of Kansas, of Northern Cheyenne, of John Brown. Though their politics would take them in different directions, thier feelings for one another remained true.
A mural depicting Sumner now covers the wall of Constitution Hall on Kansas Avenue (above, left). There should be a monument to this good man as well. So many times it was his level head that kept an insane situation in Kansas from escalating into full-scale warfare. Both sides were critical that he did not take their part. If the criticism bothered Sumner, he didn't let it show. He merely served his country, in whatever way his commanders saw fit. He died on this day in 1863 in Syracuse, New York. 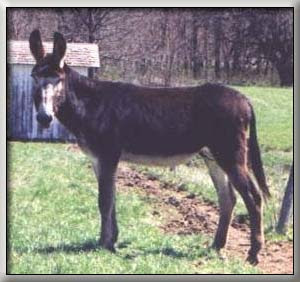 Tennessee--Mule Days are coming up April 12 - 15 in Columbia. You never knew a mule could be so entertaining! Mules compete in categories such as Best Jack, Best Jennie, Best Pair of Horse Mules, Best Pair of Mare Mules, and Grand Champion of the Show "King Mule," which may be a mare mule or a horse mule, according to the rules. There are also contests for the two-legged visitors who can play checkers. clog dance, load logs, and even lie in an effort to best their neighbors. Visit the website for more than you knew there was to know about mules! http://www.muleday.com/. Pennsylvania-- A 40-year-old intern with the National Archives stole about 165 Civil War documents including the War Department's announcement of President Abraham Lincoln's death, and sold most of them on eBay, according to wire reports. Philadelphia resident Denning McTague, who runs a website that sells rare books, worked at a National Archives and Records Administration site in the city last summer, prosecutors said. 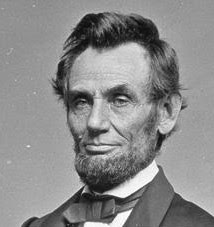 McTague has helped officials recover most of the missing items and plans to plead guilty, his lawyer Eric Sitarchuk said. "He has cooperated fully with the government in obtaining the return of the materials,'' Sitarchuk said. Of course, among many of our friends, this is a capital offense. There are so many artifacts in private hands and one reason people do not donate those to libraries and museums is that they are concerned about how things will be cared for or displayed. This intern's actions are not the norm, and most of the archivists we have dealt with have been superior!