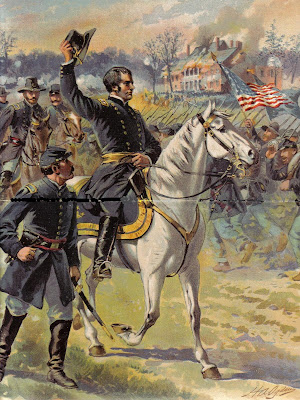 A while back I came into possession of some copies of Ellis's Illustrated History of the United States, published in 1898. Several of the full-color plates had a little damage, but others were in pretty good shape. The only problem was, the illustrations were those of Yankees. Among many of my friends, there's just not a big demand for pictures of Yankees. Apparently, the same is true for most Civil War markets. Rebels just sell better.

So here I was, with pictures of Sherman (enough said), Sheridan (can't stand him!), Thomas (very good-looking because he was a Virginian, though still a renegade), and Hooker. "Fighting Joe" Hooker was from Massachusetts, and actually, he, too, was a fine looking officer. It's so obvious from this volume that winners really do write history, because the above image is Hooker at Chancellorsville, and the common, uninformed observer would assume from this image that the Union general was victorious. Instead, Stonewall Jackson cleaned Hooker's clock.
So who could possibly want this?

D. K. Clark is a brilliant instructor at the Army's Command and General Staff College at Fort Leavenworth, Kansas. He knows everything about the Civil War and the Indian Wars. And I mean everything. NEVER argue with D. K. He wouldn't say it if he didn't know it. I remembered that he admired Hooker for some reason, so I popped in.

I pulled the images of George "The Rock of Chickamauga" Thomas and Hooker out of the brown paper bag and asked if he was interested. Several of his comrades looked on. The transaction had all the appearances of an illicit drug deal.

"How much?" asked the shrewd soldier.

"For you, right now, $10 each," I replied. D. K. quickly took a $10 from his wallet, grabbed Thomas and headed back to his office. Within ten minutes his colleagues had fired off an email, 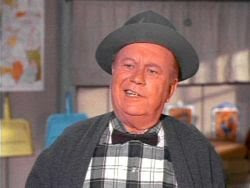 Today is the birthday of Edgar Buchanan, born in Humansville, Missouri, in 1902. (Yes, that's Humansville. Missouri seems to have cornered the market on odd place names. See Tom's blog "What's in a Name?" 11.2.06) Many of our readers will remember Buchanan as "moving might slow" Uncle Joe from Petticoat Junction, but the list of his film and TV credits is nearly endless. He starred along with William Boyd in the immensely popular Hopalong Cassidy series. He also starred in his own show, Judge Roy Bean. Having trained as a dentist, Buchanan kept his license and practiced on the side for several years just so he'd have something to fall back on. He died in 1979.

On another note, did you know Abraham Lincoln was a blogger? check out an excerpt from his blog as well as reader comments at http://www.tommcmahon.net/2007/03/joe_sherlock_wh.html.
Posted by Deb Goodrich at 5:31 PM