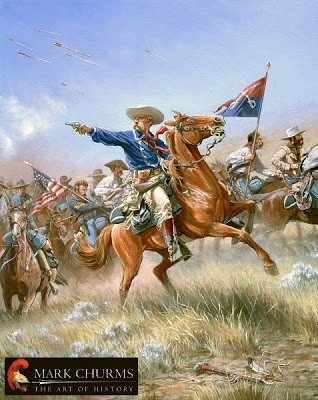 While sitting at the computer yesterday and trying to think lofty thoughts, I found myself thinking about carousing with Custer instead. Our local NPR station was playing Irish music, which turned out to be several different orchestral versions of "Garryowen" and "The Girl I Left Behind Me." 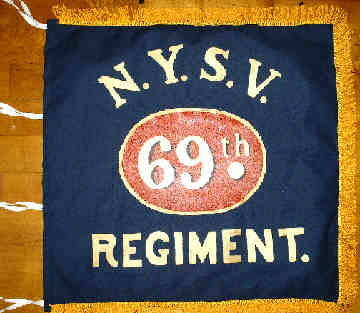 Irish soldiers, like those of the 69th New York whose flag is at right, sang and played these tunes during the Civil War, and apparently one George Custer overheard the rousing drinking tune Garryowen and adopted it for his own. The tune itself dates back to at least 1788 and, when Custer took command, became the marching song for the 7th Cavalry. The air was played when Custer's men left Terry's column at the point where the Rosebud River empties into the Yellowstone. Leaving the gatling guns behind on the steamboat Far West, the 7th were armed with pistols and rifles, guts and nerve. And their spirits were bouyed by the words:

Instead of Spa we'll drink down ale,
And pay the reckn'ning on the nail
No man for debt shal go to gaol
From GarryOwen in glory.

To hear the tune, go to http://www.garryowen.com/. Be prepared to drink and march. 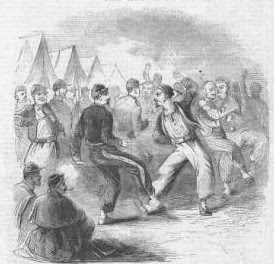 Another ditty brought to the States was "The Girl I Left Behind Me," which may date back to the reign of Elizabeth I, though it too, is believed to be originally an Irish song. Some sources say it was played whenever a regiment left town or a man-of-war set sail:

The bee shall honey taste no more,
the dove become a ranger
The falling waters cease to roar,
ere I shall seek to change her
The vows we made to heav'n above
shall ever cheer and bind me
In constancy to her I love,
the girl I left behind me.

This, too, was taken to the West, and one army wife recalled, "Then to his duty and I in a back room to my tears and prayers. I would choose a back room to shut out the tune. . . .'The Girl I Left Behind Me.' To this day when I hear that air tears come to my eyes." To hear this tune, go to http://www.archive.org/details/thegirl1904

These tunes have stood the test of time because they are irresistible, memorable, and just make you feel good! Give a listen, make a toast, and thank the Irish for the background music they provided for our history!
Painting by Mark Churms at the top; Mark's logo, The Art of History, is so appropriate. Art has been used to communicate our history for centuries, and says much about what we believe about our past, which is sometimes as important as the actual facts. The illustration above left is a Zouave unit dancing in camp, and we'll bet they appropriated some Irish tunes as well.
Posted by Deb Goodrich at 9:29 AM