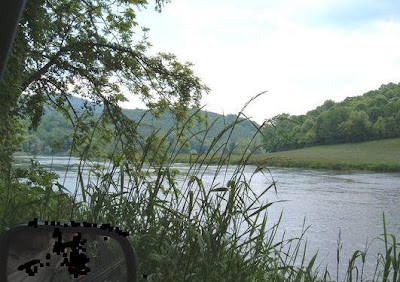 The New River flows north, meandering back and forth over the edge of North Carolina, through the mountains of Virginia, West Virginia, and eventually emptying into the Ohio. As a child, I camped on the river where aunts and uncles and cousins lived near Independence, Virginia. My sister and I were put out of the flatboat onto little islands no bigger than our bedroom while Daddy and his nephew fished or checked their laylines, dragging in catfish that looked like seamonsters, bigger than we were. When I was older, I would drive up to Fosters Falls and just sit, listening to water tumble over the low rocks; in the autumn, there was rain so soft it was like tinkling glass breaking the surface of the river. In the winter, the sheer cliff on the other side would be covered in frost as would the fields and barns and stones in the river--a scene so fragile a deep breath might have shattered it. In the spring, Easter flowers washed from abandoned homeplaces were bright yellow specks in unexpected places--the sandbars, next to feed troughs. As the days grew longer, so did the thistles, towering over me in brilliant purple and nettled leaves. At Austinville, the mine shaft was so close to the river that sometimes fish fell from the ceiling, somehow seeping through the mud. At Fries (bottom; pronounced freeze), the chunks of ice broke in the spring and sounded like cannon, according to my Grandma. Once, her mother walked across the frozen river to help a sick neighbor.

These places are as much a part of me as my bone or breath. 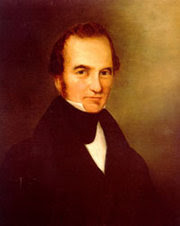 This is where Stephen F. Austin (left), the Father of Texas, first saw the light of day. It is a fitting place for a great man to be born, though in 1793 it was not far removed from the frontier. There were people living who remembered Indian raids and there were still bear and an occasional mountain lion. (My Grandma used to tell the story of her aunt who was picking blackberries when she realized a wildcat was watching her. She ran, stripping clothing as she went, and the cat would stop and tear each piece to rags. She was down to her bloomers by the time she reached her house.)

The Austins stayed just a few years. They headed for southeastern Missouri and of course, eventually, Texas. Austin was not at the Alamo; his struggles were different, political. His talents were different. He was a thinking man, a man who planned and pondered. His efforts were not always appreciated. He died alone and destitute, having devoted everything, literally every part of himself to making Texas. He was 43.

I like to think that when Stephen Austin lay ill in that foreign land, his work done, that the images of the mountains, of the frost on the river, whether in his memory or not, were in his bones, eased his breath. I like to think this little spot in Virginia along the New River helped shape Texas, the same way it shaped me.