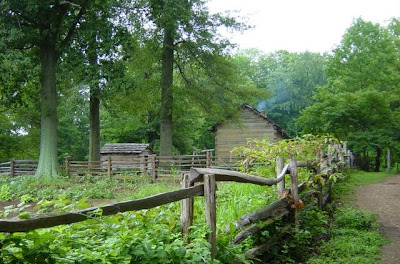 Before discovering morels, I was merely a history geek like yourself. Now, I am also a mushroom geek.

Tom and I were camped at Abe Lincoln State Park, near Dale, Indiana. It is a glorious place surrounding his boyhood home (above) and includes the gravesite of his mother, Nancy Hanks. The church young Abe attended, with the graveyard where his beloved sister is buried, is also nearby. We were kneedeep in history when Tom began filling me with tales of morels. I was so taken by the gardens and the old-timey methods of farming that I couldn't imagine that this trip could get any better, so I had no hope of ever seeing the elusive morel. Tom's own parents never told him where they found them each spring, and they only let him have a small sample, so greedy were they with this delicacy. I listened patiently to his stories, knowing full well no one would share their secret stash with us, and on our own, we would never discover them.

So we were hiking along the trail to Abe's house when an object in the path caught my attention. I picked it up and showed it to Tom. "Is this the mushroom you're talking about?"

He was incredulous. "Where did you find that?" he demanded.

"It was just laying in the path. Some animal must have dropped it."

Feverishly we combed the area, and sure enough, found three or four small morels (right). We cooked them that night and a "shroomer" was born inside me.

We moved on to McCormick's Creek State Park, northwest of Bloomington. As we rode our bikes through the scenic woods, we noticed hordes of people heading into the forests with bags. We nosed around ourselves but found nothing. The next day I went into the nearest town, Spencer, for groceries. At the IGA I asked the gentleman who was bagging my purchases if they sold morels. He said, "Come back tomorrow. I'll bring you some."

When I returned the next day, there was a five-pound bag of 6-12 inch morels waiting for me--at no charge. I gave him a book. There's no doubt who got the better end of that deal. 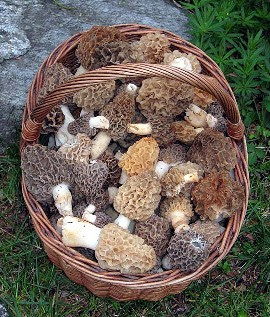 I was so hooked. I bought mushroom books and began studying online. We were living back in Virginia, and every day I walked through the same woods I had grown up with. If I had seen a mushroom when I was a child, I was told to leave it alone because it might be poisonous, so I never bothered to learn more about them. Each day, I returned from the woods disappointed. Then, it rained, and it seemed that the forest floor was alive. There were coral mushrooms of every color, cauliflower mushrooms, chanterelles, beefsteak lichen--the variety seemed endless as did the bounty.

We've begun combing the woods and parks here in Topeka for likely spots for this season's crop of morels. A couple of years ago, I found two big ones in Tom's mother's yard. You just never know. But I'm thinking of making a sign and standing out by the interstate,

"Will write history for Morels."

Richmond, Missouri, is rich with history. The grave of William "Bloody Bill" Anderson is there, along with the graves of the Ford Brothers, as in, "The Dirty Little Coward Who Shot Down Mr. Howard." Join Tom and me on May 4 or 5 (tour each day) as we take a chosen few on a van tour replete with history, fun, and mushrooms!!! Email me to reserve your seat. $60 a person buys lunch and all the excitement you can stand! etalgoodrich@aol.com

Just so none of his generals forgot who was boss, Lincoln was in the habit of wearing his tallest stovepipe hat when visiting the battlefields.
Posted by Unknown at 12:25 PM